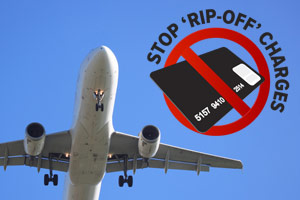 From today, the government implements its ban on excessive surcharges for credit and debit card payments. The ban comes following the Which? campaign for an end to ‘rip off’ surcharges.

Consumers have been paying extortionate surcharges for too long. So in March 2011, Which? issued a super complaint to the Office of Fair Trading (OFT), asking it to investigate the issue. The OFT upheld the complaint and, in June 2011, the government promised to ban excessive surcharges.

Richard Lloyd, executive director of Which?, said: ‘Over 50,000 people supported our campaign to end rip off surcharges so we’re pleased the Government is implementing this ban.’

Research from Which? in 2011 found that only one in 10 consumers felt that surcharges are fair, while 90% said the government should take action on excessive surcharges.

An end to expensive, hidden charges

Under the new rules, businesses will be expected to prove that any payment surcharges are representative of the cost to the business. The OFT hopes that this will spell the end of expensive, hidden charges added at the end of payment process.

Consumer Minister, Jo Swinson, said: ‘[Consumers] are fed up of thinking they will be paying a certain price for goods only to find out towards the end of the process that the final price is much higher.

‘I am delighted that the ban will stop retailers from cashing in by charging add-on fees that simply do not reflect the real cost of processing the payment. Consumers will be less likely to get nasty surprises as they will have a clearer and more transparent breakdown of what they are paying for.’

Micro businesses and business start-ups will be exempt from the regulations until June 2014, when the directive comes into force. This will allow them more time to prepare themselves for the ban.

The Which? campaign to ban ‘rip off’ surcharges

The ban marks the success of the Which? campaign to end excessive surcharges, but work will still continue. Richard Lloyd said: ‘For it to be to be effective there must be a tough enforcement regime and companies must play fair and not pass costs on to customers in other ways.

‘We will be monitoring the ban closely and want people to tell us about surcharges they think are excessive.’

If consumers find examples of excessive surcharges after 6 April 2013, Which? asks that they report the companies in question via its quick and simple tool. Charges for paying by debit card should not be anymore than around 20 pence – and should ideally be free. While credit card charges should be no more than around 2%. Any companies found breaking the rules will be reported to Trading Standards.