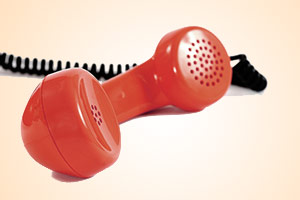 Which? is calling on the government to take action on nuisance calls and texts amid new research that reveals the scale of the problem.

New Which? research has found that the Telephone Preference Service (TPS) is failing to cut off nuisance calls – people are still reporting high numbers of calls when registered on the TPS.

The survey also found that 85% of people are still being plagued by unwanted phone calls, with one in 10 of them receiving, on average, a whopping 50 or more unsolicited calls each month.

In March this year, the Which? Calling Time on Nuisance Calls and Texts campaign asked the Information Commissioner’s Office (ICO), the Ministry of Justice, Ofcom and the Office of Fair Trading (OFT) to form a joint taskforce within 12 weeks to stop unwanted calls and texts.

Time is now up. While there has been some progress and coordinated action, there needs to be a new tougher approach, led by government, to deal with the scale of this problem.

Which? is also calling on people to pledge their support for our Calling Time campaign.

Which? executive director, Richard Lloyd, said: ‘Consumers are sick and tired of being bombarded with nuisance calls and texts. The current system is failing the public and given the scale of this problem, it’s time for the government to step in.’

If you’re being plagued by nuisance calls, read our guide on what you can do.

Our survey found that registering with the TPS is the top action taken by people to reduce unwanted calls, yet 57% of those registered are not satisfied with the service.

This is hardly surprising, as we found that people registered with the TPS still received, on average, 10 unsolicited calls in the last month – compared to five calls, on average, received by those not signed up.

This isn’t to say that signing up to the TPS means you’ll get more nuisance calls. More than half of those registered on the TPS told us they felt they were receiving fewer calls than they did prior to signing up.

Instead, TPS members typically sign up because they get so many calls, and it’s likely the TPS reduces them to a more ‘reasonable’ level.

If you’re receiving nuisance calls, it’s worth signing up to the TPS because unless you’ve signed up, companies that make unsolicited calls to you are not breaking any rules.

The TPS’s limited remit means it can’t punish companies that break the law or even compel them to respond to its letters. Instead, enforcement action is undertaken by the ICO.

We asked the ICO why it hasn’t taken more action. It told us that although it receives a huge number of complaints, it has to disregard around 60% because they’re about non-marketing calls (which don’t fall within its jurisdiction) or because the complainant can’t identify who’s making the call.

The regulators have confirmed to Which? that they need more powers to properly tackle the problem of nuisance calls and texts, and we’re urging government to make this happen.

Today we’re calling for the government to strengthen the law on consent and the use of personal data. We’re also calling for it to give regulators the power to properly police and punish rule breakers and to send a clear message that unlawful practices won’t be tolerated.

Richard Lloyd added: ‘We urgently need to see a new approach, new laws and new technology to tackle this scourge on people’s lives. People must be put back in control of their personal data.’