Car hire companies are failing to deal properly with customers complaints, Which? research has shown.

A massive 60% of Which? members who had made a complaint said they were unhappy with how car hire companies and brokers dealt with the matter. 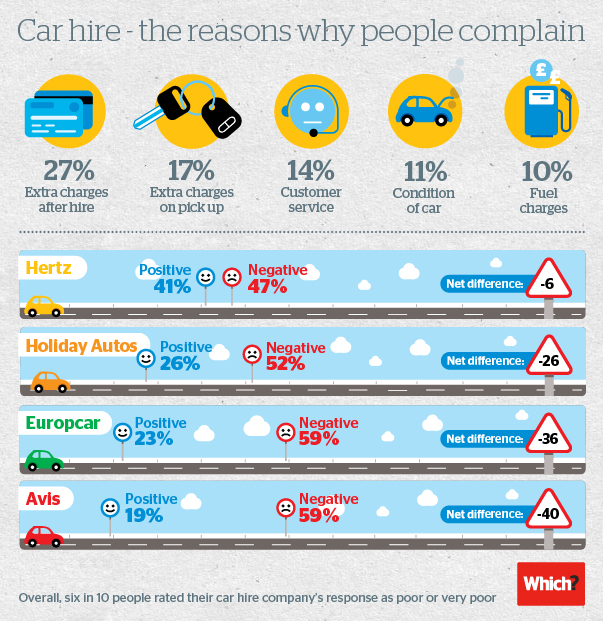 The biggest source of complaints (27%) was extra charges imposed at the end of the rental when or after the car was returned. These are often made for apparent damage to the car.

Nearly one in five (17%) Which? members complained about extra charges they had to pay when they picked up the car at the start of the rental. The other top reasons for complaint were customer service (14%), the condition of the car (11%) and fuel charges (10%)

Hertz had the best complaints record, but even then a higher proportion (47%) of people gave it a negative rating than those who gave it a positive rating (41%).

The other two companies we could report on – Europcar and Holiday Autos – both had a higher proportion of people giving them a negative rating than positive.

Which? is calling on car hire companies and brokers to be make all their compulsory and optional charges clear upfront, before a consumer commits to a sale.

Richard Lloyd, Which? executive director, said: ‘It’s no surprise that consumers are completely fed up with hidden and sneaky car hire charges, and to add insult to injury they are getting a poor response when they complain about it.

‘Car hire websites must be clearer about charges to allow consumers to shop around for the best deal. We are pleased to see, following our last invesigation, that some companies are making charges more transparent, but we need to see all companies making improvements.’

Which? asked 3,202 members in February 2013 about their experiences with car hire. Of those, one in 10 had made a complaint about car hire in the previous two years.