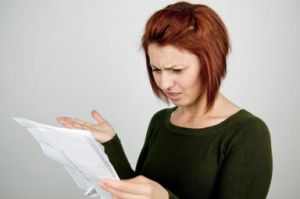 Being turned down for a credit card is frustrating enough, but a new Which? Money investigation reveals that many providers add insult to injury by not helping customers to understand the reasons behind a rejection.

Eight in ten (79%) rejected applicants had problems with the amount of information provided, with half not being told anything beyond a generic message instructing them to ‘check their credit file.’ Three in 10 (30%) said they were told nothing at all.

Which? surveyed a sample of 2,013 GB adults about their experiences of applying for a credit card. Four in 10 people have applied for a credit card in the last two years, and three in 10 have been rejected at least once.

Nearly half of those who have been turned down said they were dissatisfied with the way that the company concerned handled their rejection, and just under a quarter described themselves as ‘very dissatisfied.’

When we asked unsuccessful applicants why they felt dissatisfied, poor communication (31%) and a lack of advice or information as to why an application had been rejected (29%) were the most commonly cited reasons.

Barclaycard had the highest percentage of people who were told more than ‘check your credit file’, but this was still les than a quarter (23%), and MBNA had the lowest percentage at 9%.

Lenders must do more to help prospective borrowers

The Consumer Credit Act states that when a rejection is based on information obtained from a credit reference agency, the creditor must tell the borrower that this is the case, and provide details of the agency concerned. They are not obliged to offer any further information.

Which? executive director, Richard Lloyd, said : ‘Credit card providers are letting people down by failing to give them constructive advice after a rejection. We want lenders to give a useful reason for refusal and practical tips so that borrowers can take steps to improve their chances of being accepted in future.’

‘We also believe people should be able to shop around for credit without being penalised. We’d like all companies to use quotation searches so people can see whether they may be accepted without a full application footprint being left on their credit file. People should be put back in control of their credit.’

• Don’t reapply straight away if you’ve been rejected for a credit card, as multiple applications within a short space of time may suggest to lenders that you are in financial difficulty.

• Make sure you’re on the electoral roll as this will increase your chances of being accepted for a credit card.

• Pay your bills on time – setting up a direct debit will help to avoid falling behind. Missed payments stay on your credit file for at least three years and will negatively affect your rating.

• Cancel old credit cards you no longer use before applying for a new one, as potential lenders may decide you don’t need any additional credit.

• Review your credit report to make sure all the information held about you is up to date. For example, old accounts might still be linked to a previous address, and this can count against you.