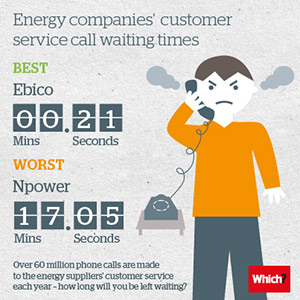 Call Npower’s customer services and you will be left on hold for an average of seventeen minutes – but small energy provider Ebico answers customer calls in just 21 seconds, according to our latest research.

In a test of call waiting times among energy suppliers, the longest we were left on hold was 29 minutes on a single call, while the shortest was just four seconds. Npower was worst overall and Ebico best but 10 out of the 16 energy suppliers we called took, on average, more than two minutes to answer the phone – what we consider to be a fair benchmark.

If you’re sick of waiting for your supplier, vote with your feet. Use Which? Switch to compare energy prices and switch companies.

We called 16 energy companies 12 times at set times of the day and recorded how long it took between finishing dialling the customer service number and getting through to a human being. The full list of average waiting times is below, ranked from fastest to slowest.

Many energy companies are slower to pick up calls from existing customers than prospective ones. Of the big six energy providers (British Gas, EDF, Eon, Npower, Scottish Power and SSE) all but Eon were quicker to answer calls to its sales number than calls to its customer services. The times for sales calls were recorded for our March 2013 investigation into energy sales.

Listening to messages such as ‘your call is important to us’ is a bugbear for a fifth of the consumers we spoke to. Some energy companies, such as British Gas, Scottish Power and SSE, even played advertising messages while you wait.

Phone service is just one of the factors that affect how consumers rate their energy suppliers. Our full energy company reviews reveal which are the best and worst energy suppliers, as voted by their customers.

We looked at the types of phone numbers that energy companies use and found that:

Which? executive director Richard Lloyd said: ‘It’s outrageous that some energy suppliers are leaving their customers dangling on the phone, in some cases even paying for the privilege, for anything up to half an hour.

‘With rising energy prices one of the top consumer concerns, people deserve to feel confident that customer service is a top priority for their energy supplier.

‘Energy companies need to get their priorities right and stop putting sales over service.  We’d like to see calls to customer service centres being picked up within two minutes and that if they offer a freephone number for sales they should do the same for customer service.’

The full article, ‘Energy Supplier Customer Service Rated’, appears in the August issue of Which? magazine. If you’re not already a Which? member, sign up for full access to our website and Which? magazine.