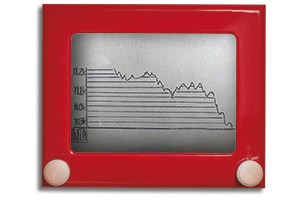 A survey of Which? members who invest their money has found that 51% have made a decision they have come to regret. And almost two thirds of those with a regret cited poor investment performance as the source of their anguish.

Which? asked 2,800 members if they have ever made an investment they have regretted – and if so, why?

As well as poor performance, significant numbers identified mistiming the market, acting on questionable financial advice and taking too much risk as common pitfalls.

‘I made an investment that underperformed’

Of those with an investment regret, 64% said disappointment with performance was the cause. One member, for example, told us he regrets two long-term equity investments that have consistently underperformed their benchmark indices.

Unlike 48% of those with an investment regret, who told us they pulled their money out and moved on, this member is clinging on, stating ‘if the market approaches its peak, I’ll get rid of them’.

‘I mistimed my investment’

Investing at the peak of the market, just before a significant drop in valuations, is another common regret with our members, with 34% telling us they regret getting their timing wrong. One member invested just before ‘Black Monday’ and the stock market crash of 1987 when the UK market fell by over 25%.

Other investors cited the bubble in technology shares around the turn of the millennium, with one member buying a specialist technology unit trust at the peak of its popularity.

‘I received the wrong advice’

Other investors, 28% of those with a regret, emphasised that taking professional advice is no guarantee of investment success. One member received advice to take out an endowment policy in 1990 – it’s set to mature in 2015 with only 60% of the promised return, he reports.

Another told us of an even worse experience, when an adviser invested his money in an unregulated scheme without his knowledge. The adviser was later fined and suspended.

Lack of research and planning

Other popular regrets were down to a lack of research or poor planning, with 16% telling us they wished they had carried out more research themselves and 12% saying they made an investment without fully appreciating the pros and cons.

Others regretted buying investments that were too high risk, difficult to get their money out of or hindered by high fees that they didn’t understand at the outset.

How to avoid investment regrets

There are a number of steps you can take to minimise the possibility of future regrets. As a starting point, ensuring you hold a diverse portfolio will mean that you reduce the impact of market falls in any one area. Shares, bonds and property based investments will often move at different times and for different reasons.

And when it comes to planning and researching your investments, Which? has a comprehensive range of guides and resources to help put together a balanced portfolio that suits your attitude to risk.