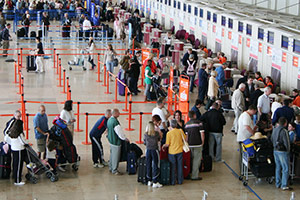 Online check-in is not putting an end to queuing at UK airports, a Which? Travel investigation has found.

New research shows that queues at bag-drop desks can often cancel out any benefits of using online check-in. We found very little difference in the time members said they waited for check-in desks and the time they waited for bag drop after checking in online.

Our member survey revealed Stansted airport as the worst offender, consistently having the longest waits for check-in and bag drop. Southend airport, on the other hand, which topped our customer satisfaction table for best UK airport, also performed best for bag-drop times. The average waiting time for bag drop at Southend was eight minutes – half the 16 minutes that you’d wait, on average, to drop off a bag at Stansted.

The introduction of online check-in was supposed to put an end to the days when the first experience of your holiday was a massive queue at the airport. But queues are still with us – and a third of Which? members list them as one of the most frustrating aspects of air travel.

When we looked at the average waiting times for major UK and Irish airlines, we found hardly any difference between check-in and bag drop. The biggest difference was with Thomas Cook, where the bag drop wait of 12 minutes was seven minutes shorter than for check-in.

Thomas Cook also had the biggest difference for the proportion of people having a short wait. Three quarters of members who used bag drop were dealt with in less than 15 minutes, compared with about four in 10 of those using check-in desks.

The difference was negligible for other airlines. Generally a higher proportion of people were dealt with in less than 15 minutes if they used bag drop rather than check-in, but the differences were usually small.

Airports and airlines frequently say that queues have been reduced because a high proportion of passengers check in online and travel with hand luggage only. And our survey does confirm that the majority of people are now checking in online. Two thirds of Which? members did this, compared with about a third who checked in at the airport.

However, the vast majority of members (eight in 10) had luggage to put in the hold, regardless of whether they checked in online, at a desk or using a self-service machine.

We asked 11,537 Which? members about their airport experiences in the previous 12 months, finding out from those who used some form of check-in or bag drop how long they had to wait. From their answers, we were able to calculate average (mean) waiting times for airports and airlines.