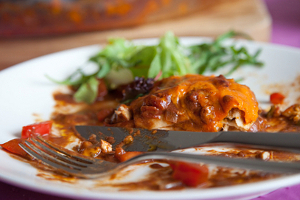 New research from Which? reveals that around 14 million people are cutting back on food waste and using leftovers to save money.

Eight in 10 consumers (78%) are worried about rising food prices with nearly half (45%) saying they’re spending a larger proportion of their income on food compared to 12 months ago.

‘Rocketing food prices are changing consumers’ habits, with more people helping themselves by cooking with leftovers and preparing smaller portions to avoid chucking expensive food in the bin.’

We found that consumers are changing their shopping habits in an effort to reduce food waste. A third of those surveyed say they are buying less food and a quarter are doing more frequent ‘top-up’ shops rather than one main food shop.

In the past 12 months, nearly half of shoppers said they freeze food (47%) or cook with leftovers (47%) to avoid waste. The survey also found that two in five (39%) said they are cooking smaller portions, so there is less chance of meals going in the bin.

In a guest post for Which? Conversation, Jamie Oliver has shared his tips to help households cut down on food waste. His tips include making a shopping list, using frozen vegetables, freezing fruit and herbs and learning how to joint a chicken.

Jamie Oliver said: ‘I’ve had so many requests for advice on how to save money on food without compromising on taste, so I’m not surprised that Which? has found people are being really careful.  It’s the main reason I wrote the ‘Save with Jamie’ book and filmed the TV series.’

As food prices rise and family budgets get tighter, it should be easy for shoppers to see at a glance which product is the cheapest. We want supermarkets to introduce clear, consistent unit pricing on food to help people find the best deals. Richard Lloyd added:

‘We want supermarkets to help people find the best deal by displaying simpler pricing and ensuring that special offers are genuinely good value for money.’