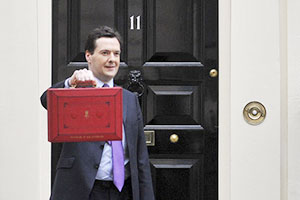 A new Which? campaign is calling on Chancellor George Osborne to cut energy bills down to size.

It comes after four of the so-called ‘big six’ energy firms announced price rises of between 8% and 10% this autumn.

Join our new Cut them down, George campaign to urge the Chancellor to boost competition in the energy market and cut the cost of government energy policies we can’t afford.

Our research shows almost eight in 10 people are worried about energy prices – with three in 10 saying they don’t know how they will afford to heat their homes this winter.

And four in 10 people say they can’t guard against rising costs by reducing the energy they use because they have already cut down.

If you’re worried about your gas and electricity bills, compare energy prices with Which? Switch to check you are on the best deal.

We want Mr Osborne to stand up for consumers when he stands up in the House of Commons on 4 December to deliver this year’s Autumn Statement.

We have written the Chancellor an open letter, calling for him to cut the big six energy firms and the cost of government energy policies down to size by:

These measures could collectively save consumers up to £1.8bn per year.

Find out more about the cost of gas and electricity with our guide to energy prices.

Which? executive director Richard Lloyd said: ‘Consumers have been left reeling by the recent round of inflation-busting price hikes.

‘People need help to cope with the rising cost of their energy bills – and they need it now.

‘When George Osborne stands up to deliver his Autumn Statement we want him to stand up for the millions of hard-pressed consumers who are grappling day-to-day with rising energy costs. He must cut the big six companies and the cost of government energy policies down to size.’

Our research: Populus, on behalf of Which?, interviewed a representative sample of 2,018 adults online between 18 and 20 October 2013.