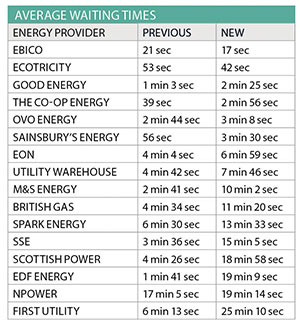 As if rising energy prices were not bad enough news for consumers, Which? has found that the time it takes to speak to your energy provider’s customer service department is getting worse. All 16 suppliers we called, bar Ebico and Ecotricity, left us on average waiting longer than when we last put them to the test in April.

Half of the 16 suppliers we called took on average over 10 minutes to answer the phone.

Find out all you need to know about gas and electricity firms, including reviews based on the experiences of more than 10,000 customers, in our energy companies reviewed guide.

We called each energy supplier’s customer service number 12 times at set times of the day between 14 and 23 October and recorded the time it took to speak to a human being. This was a repeat of the same investigation we ran in April 2013, so we could compare to see if suppliers had improved.

But we found quite the opposite. On average, 14 out of the 16 energy companies’ customer service departments left us waiting on hold for longer than they did when we carried out the same investigation in April. Our latest research also found that the longest average call waiting time increased from 17 minutes 5 seconds to over 25 minutes.

Scottish Power left one of our mystery callers waiting in one single call for 46 minutes and 49 seconds. By contrast, the shortest single call was just 6 seconds to Ecotricity.

We found First Utility had the longest average waiting times, leaving us hanging on for over 25 minutes before taking our call. This is slower than the 6 minutes and 13 seconds average time in our original investigation in April. First Utility told us that price rises had created extra calls, and issued this statement: ‘We apologise that it’s been difficult to get through to us recently, but we are confident things will improve substantially.’

Npower came bottom when we last conducted this research in April. It told us then this was due to an abnormality – but this time we had to wait even longer. Npower said: ‘Our call volumes doubled as customers looked to switch to fixed tariffs following reports of price increases.’

EDF Energy, British Gas, Scottish Power and SSE told us these long waiting times were due to unprecedented demand due to price rise announcements.

Which? thinks it’s not fair that existing customers should have to wait so long to get through to their energy provider, particularly as the companies towards the top of our table seem to be able to cope with demand.

Which? executive director Richard Lloyd said: ‘Not only are customers being left waiting on hold for far too long, but it seems to be getting worse. With trust in the industry already at rock bottom and consumers being hit by the latest round of price hikes, it’s time the energy companies starting putting their customers first.’

The Which? investigation is yet another example that the energy market doesn’t work for consumers. Which? thinks that the Chancellor should stand up for consumers when he stands up in the House of Commons to deliver this year’s Autumn Statement on the 4th December. We’re calling on George Osborne to:

We have made recommendations to the Chancellor that we believe will improve competition in the market and control the costs being added to consumers’ bills, while still ensuring the same number of households are helped to better insulate their homes.

You can support our campaign “Cut them down, George” by emailing your MP.