Hotpoint has issued a safety notice about two of its dishwashers, something Which? raised concerns about earlier this year.

Hotpoint has announced that some dishwashers from their DWF3 and DC26 series may pose a potential fire risk. The risk comes from a faulty electrical component which can cause overheating and, in some cases, fire. 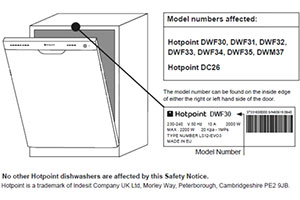 The models thought to be a risk were manufactured between January 1999 and September 2003 and sold in the UK. The model numbers affected are:

You can check the model number by looking at the sticker on the inside of the door, as shown in the picture above. It’s recommended that you switch off and unplug your dishwasher before checking.

If you think your dishwasher or oven is affected, call Hotpoint on 08442 412574, or email dwf@hotpoint.co.uk, to report the problem. Hotpoint says that it will arrange a visit to repair the product.

A safety notice has also been issued for a small number of Hotpoint and Indesit gas cookers sold during October and November 2013 in the UK. 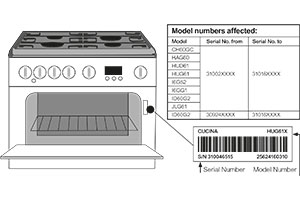 The manufacturer says there is risk that a component may fail, which could lead to a gas leak. To find out if you have an affected cooker, check the model and serial number on the inside of your cooker door. The models affected are:

If you own a cooker with these model and serial numbers, you can call 01733 287 843 or email cookers@hotpoint.co.uk or cookers@indesit.com, to arrange a free check and repair.

Which? concerns over appliance fires

We submitted a Freedom of Information request for fire brigades data about faulty appliance fires. We discovered that some brands appear to cause a higher number of fires than others.

For dishwashers, there were more fires connected to Hotpoint than other brands – not surprising, given a previous dishwasher recall in April 2013 (although it contacted some owners in October 2012). Those models previously recalled were the FDW20, FDW60, FDW60A.

However, we found that there were as many instances recorded for the DWF3 dishwasher range, as for the Hotpoint ranges that had been recalled (although model numbers aren’t always recorded) .

When we spoke to Hotpoint about our findings and concerns, they told us: ‘It is difficult to compare relatively small numbers of incidents against market share and draw these conclusions. Hotpoint’s assessment of the DWF3 dishwashers found the risk was “very low”.’

At the time, Hotpoint concluded that repairs weren’t necessary, and recommended that customers called them with any concerns.

We asked Hotpoint what had changed and it said: ‘Hotpoint continually monitors the specification and performance of all its products to identify issues that may need action. As part of this ongoing process we have now decided to initiate a voluntary repair programme for the Hotpoint DWF3 series and DC26 dishwashers.’

Which? subscribers can read the full article in the Which? Magazine archive.

In July 2013 we asked 1,091 members of the public about recalls. We analysed the data collected by fire brigades about the cause of fires. The cause is suggested not definitive. We excluded fires where the brand was not recorded when working out the proportion of fires each brand accounted for. We compared these against manufacturers’ market shares, although these vary over time so aren’t definitive.