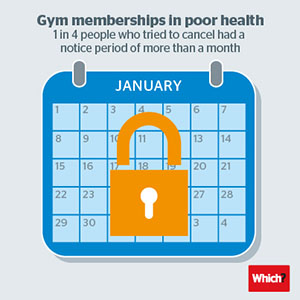 New Which? research has revealed that some gyms are flexing their muscle when it comes to their membership contracts.

One in four of those surveyed who had tried to cancel a gym membership had a notice period of longer than a month.

And one in five were unable to cancel due to being tied into a minimum term contract.

It’s important to read the small print before you sign up because generally what you sign up to stands – unless you can prove there’s an unfair clause in the contract.

To learn more about your rights, see what to do if you’re trapped in your gym membership.

Our survey revealed that an increase in membership fees was one of the top reasons people wanted to cancel, with more than one in five citing it as a reason for cancelling.

But you can’t necessarily cancel if your gym puts up its prices, or if you find out you could get the same package cheaper elsewhere.

Saying that however, a clause which allows a major price increase but doesn’t allow you to end the contract, could be considered as unfair.

For more information, see our guide on how to cancel your gym membership contract.

If, like one in four people in our survey, you were told you had to give longer than a month’s notice to cancel, all is not lost.

A High Court ruling in 2011 regarding a specific set of gym terms opened the door to the argument that contracts that commit members to a minimum term in excess of one year, could potentially be unfair.

And an Office of Fair Trading (OFT) investigation in 2013 secured the following:

• extended rights for members to cancel their contracts early should their circumstances change in a way that makes attendance at the gym difficult or unaffordable – such as job loss or injury
• a commitment not to describe membership as being of a fixed duration, if the contract automatically continues on a rolling basis after the initial membership period has expired
• greater transparency about key membership features, including initial membership periods and cancellation rights, and for those to be provided upfront as part of the sales process.

See which gyms are included in the OFT investigation.