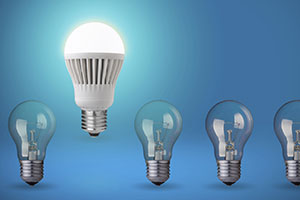 Many LED light bulbs stop working before the end of their promised life span, and some – including bulbs from Ikea and TCP – didn’t even reach the EU’s soon-to-be implemented minimum lifespan of 6,000 hours, new Which? research has discovered.

From 1 March, new EU regulations say that 90% of any batch of LED bulbs should last at least 6,000 hours.

Five types of bulb stopped working before the 6,000-hour mark for the majority of samples we tested. The TCP and Ikea bulbs were the only ones sold in the UK – both have now been discontinued.

We test light bulbs more thoroughly than anyone else. Check out our to discover which bulbs are worth buying and which ones you should avoid.

In the tests – carried out by Which? and our European partner organisations – we took five samples each of 46 different bulbs. The bulbs were switched on for 165 minutes, then off for 15 minutes, in a continuous cycle until they died.

Ikea said the bulb had passed its own tests and those in a third-party lab. It is looking into why the bulb failed our test and has removed it from sale in countries where it was still available.

TCP said it was already aware of the problem with this bulb, which is why it withdrew it from sale. TCP added that it no longer deals with the supplier of that bulb and now makes its LED bulbs in-house.

We’re in the process of testing the life span of many more LED bulbs – we’ll update you if we find others that burn out prematurely.

If you’ve bought bulbs that haven’t lasted as long as they should, let us know at our Which? Conversation post on LED light bulbs.