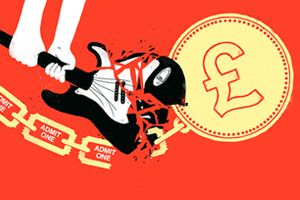 In a win for Which?’s Play Fair on Ticket Fees campaign, the ticket companies we named and shamed have committed to display all their compulsory additional charges upfront.

Six weeks since we called on ticket companies and entertainment venues to Play Fair on Ticket Fees, more than 37,000 people have pledged their support, and now seven major ticket companies have agreed to show their compulsory charges upfront.

Our research found the overwhelming majority of people (93%) agree that companies should always show any extra compulsory charges upfront.

BH Live Tickets, See Tickets, ATG Tickets, Ticketmaster, Stargreen, Ticket Soup and Ticket Web have agreed to display all extra costs, such as delivery and booking charges, at the start of the online booking process, making it easier for customers to compare prices between different companies.

See Tickets has already put these changes into practice and Ticket Soup says it will update its website this week. ATG has promised to do so by March. We are working with the remaining four companies and expect them to commit to a timeframe in which they will make these changes.

Which? is now calling on ticket companies to go further by justifying their fees and setting them at a fair level. Our investigation uncovered extra charges of up to more than a third of the ticket’s face value, as well as examples of consumers being charged up to £2.50 to print tickets out at home or £3 to pick them up from the box office.

Our research shows that eight in 10 (82%) think additional fees are a rip-off, while nine in 10 (91%) told us they think it’s unfair to be charged for printing tickets at home. A similar number (89%) thought the same about being charged to collect tickets from the box office.

Lack of transparency in the ticket industry

Which? is concerned about a lack of transparency in the ticketing market, as consumers are not being given a clear explanation of why additional fees are charged or where their money goes.

We also think that delivery fees should only be used to recoup costs associated with delivery, and don’t think the high fees some companies charge for delivery or even to print tickets off at home or collect them from the box office are fair.

Which? executive director Richard Lloyd, said: ‘The show is now over for hidden ticket fees with some of the biggest ticket companies promising to display all compulsory charges upfront. But people are still concerned at the level of some fees so we will continue to challenge the industry to clearly explain their fees and set them at a fair level.’

Consumer Minister Jenny Willott said: ‘The sector has made some progress on this with more transparency about what the final price will be and I welcome Which?’s efforts to help highlight this issue. We want to make sure people can compare prices across the board so they can see if they’re getting a bad deal and if so choose to take their business elsewhere.’