The Volkswagen Golf BlueMotion is a family-sized hatchback with a difference – it promises a combined 88.3mpg, making it as frugal as a far smaller car.

However, when Which? tested the three-door 1.6-litre diesel Golf BlueMotion in our lab in more realistic driving conditions than the official tests, we found it missed its claim by 14mpg. 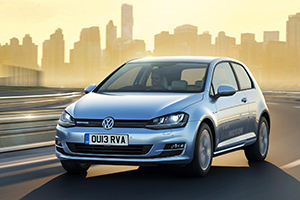 Using the average diesel price for December 2013 of 138.61p per litre (source: AA) and covering 12,000 miles a year, the VW Golf BlueMotion 1.6 TDI should only cost owners £856 in fuel bills, if you calculate using the claimed mpg figure.

However, the 14mpg difference between the claimed 88.3mpg and our tested 74.3mpg results in a £161 fuel-cost disparity, with diesel bills over a year increasing to £1,017 from our results.

That’s not to say the Golf BlueMotion isn’t efficient, though, and, as our tests reveal most cars miss their mpg claims. Of all the cars Which? tested in 2013, the average shortfall in fuel efficiency for diesel models was 6.6mpg.

The average tested economy of all diesel models that went though our lab in 2013 was 52mpg. This makes the Golf BlueMotion’s tested figure of 74.3mpg look rather good.

Read our guide to cutting your own fuel costs.

What’s different about the Which? mpg test?

Like the official EC test, all our fuel economy testing is conducted in a lab using a rolling road and at a controlled temperature.

Unlike the official EC test (in which no power-consuming devices are switched on), the Which? test uses the air-conditioning for the motorway and hot engine start sections of testing, as we believe this is more realistic.

All Which? tests are run with the cars’ low beam or daytime running lights switched on, and, if there’s a gear-shift indicator fitted to the car, the Which? test team changes gears in line with the recommendations of the system.