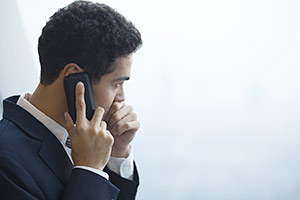 Which? is calling for the ban on costly customer service numbers to be extended to all financial companies, including insurers.

The Prime Minister’s intervention meant that flood victims would no longer be forced to pay up to 41p a minute to request assistance.

Yet, Which? research suggests that 79% of home insurers are also using 084 or 087 numbers for their customer lines, meaning customers often have to pay similarly high amounts to make a claim.

That’s why we’re pressuring the Financial Conduct Authority to prohibit all financial companies from using these high-rate customer service numbers.

You can support this campaign by signing our online petition.

Our Costly Calls petition attracted more than 65,000 signatures in 2013, which helped convince the government to advise its own departments to stop using expensive phone numbers for key public services.

It also helped ensure that transport companies were added to the Consumer Rights Directive, meaning they will be banned from using costly phone numbers for their helplines from June 2014.

We are now focusing on ensuring that all financial companies including insurers are added to the directive and that has helped attract another 12,000 signatures in the last week alone.

In the meantime, if you want to avoid a hefty phone bill when calling these companies then read our step-by-step guide to avoiding costly calls.

Which? executive director Richard Lloyd praised the government’s intervention on the Environment Agency’s 0845 Floodline number but called for further action from the government on the issue.

He said: ‘We’re pleased the Prime Minister intervened to make sure flood victims can call a cheaper helpline, but they could still face huge phone bills with their insurance companies as most use high rate numbers.

‘We’re calling for this to stop. Victims shouldn’t have to pay a premium to make a claim, especially when many will be calling from a mobile.

‘The government must also make sure other public bodies play fair and drop high rate numbers as soon as possible so that people are not left out of pocket when calling essential services.’