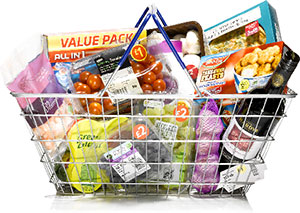 We’ve rounded up the pricing tactics to watch out for in supermarkets – from those red ‘only £1’ stickers to bigger packs that are actually worse value.

You may be the type of shopper who slavishly follows a list, compares prices and doubts every offer. Or you may just sling things in a basket and hope for the best. But however you shop, working out what’s cheapest is not easy – and sometimes it’s actually impossible.

Supermarkets and big brands employ a host of tactics to get you to part with your cash. In the March 2014 issue of Which? magazine we highlight these shopping tactics and oddities to look out for.

You can read about five of the tactics below, along with examples that we spotted. If you’re a Which? member you can read the full article in your March 2014 magazine.

To compile our list we we crunched data from the independent shopping website Mysupermarket.co.uk visited each supermarket and recorded screen grabs of their websites.

We’ve continued to uncover products getting smaller while their price stays the same, or even increases. For instance, Nestlé Matchmakers Cool Mint shrank from 151g to 130g, but the price stayed the same at £2.24.

Supermarkets alternate offers on two or three similar items that you might buy interchangeably, swapping the offers between each – often within a single day. This means they can always sell one of them at a discount. We found that Tesco alternated the offers between three bottles of Hardy’s red wine. For the five months June to November 2013 one of these was always on offer at about the same price(between £5 and £5.98), often switching between bottles on the same day. This meant one of them could always be on offer.

Supermarkets sometimes change the size of products but not the price, which can result in you paying the same but getting less. Ocado sold 225g of raspberries for £2.99 – the pack size then dropped to 200g but the pack still cost £2.99.

Just because a product has a red ‘£1’ or ‘only £1’ that doesn’t mean the price is discounted. We’ve come across examples like this in special displays, but these items were £1 the previous year. For example, Asda had everything from garlic to cherry tomatoes with red £1 stickers that had been the same price for most of the previous year.

More than two in five of you say you’ve bought something you thought was on offer but wasn’t – one example we found was Marks & Spencer mixed grapes were next to a ‘2 for £4’ sign but the grapes nearest to the sign weren’t included.

The supermarkets and brands to respond to our findings

Tesco said that the alternating offers complied with guidelines and that it doesn’t change prices on different days – you wouldn’t have been charged the higher price.

Birds Eye said it offers different pack sizes so retailers can choose the best size for their stores.

Ocado said it is common practice to reduce weights slightly out of season to ensure that the product remains affordable.

Marks and Spencer said that all of its products have a shelf-edge label next to them stating the price and promotional details. Most on products promotion are clearly stickered.

You can find out more about our campaign to make special offers special and pledge your support on our food prices campaigns pages.