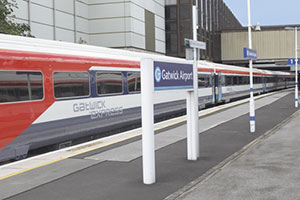 The Gatwick Express has come last in our survey of UK airport train services, as passengers complain that its ticket prices are too high.

The service between London Victoria and Gatwick airport achieved a customer score of only 60% – well below the 87% notched up by the highest-rated airport service: Virgin Trains from Birmingham to its airport.

Four train options from London to Gatwick feature in our survey of Which? members. But the Express service, which costs £19.90 one-way for the half-hour journey, only received two out of five stars for value for money.

Earlier this month, we also revealed the results of our survey of UK train companies for commuter and long-distance journeys.

Which? executive director, Richard Lloyd, said: ‘There are unacceptably wide differences in the levels of customer satisfaction for airport trains, with many people especially unhappy about the high cost of some express services.

‘Train companies must do more to listen to travellers’ views, which is why we’ve launched a campaign to Get Trains on Track, calling for a better response to complaints.’

Which? is encouraging frustrated passengers to complain about their bad train experiences, and find out free information on their passenger rights and what compensation is available.

It’s a familiar story for the other London airport express services. The Gatwick, Heathrow and Stansted Express train services were the only ones in the survey to get fewer than three out of five stars for value for money.

The Heathrow Express scored 70% and was highly rated for comfort, luggage space and frequency. But members said the £21 ticket price was too high for the journey – it received just one out of five stars in this category.

The Stansted Express scored 69%. Passengers liked the luggage space but not the £23.40 one-way ticket price. 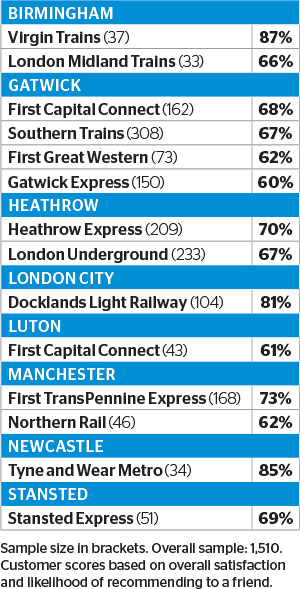 For Heathrow, members gave the London Underground’s Piccadilly line a similar score to the Express. It’s far cheaper – £5.70 for a peak-time single for the near hour-long journey from the city centre – but members didn’t find it great for luggage.

The highest-rated London service was the Docklands Light Railway to London City airport – customers liked the frequency as well as the prices.

The lowest-rated London service was First Capital Connect to Luton airport – it was marked down for comfort and cleanliness.

For Birmingham, Virgin Trains was far ahead of its competitor. Passengers liked the £2.40 price of an anytime single from New Street to the airport. They were also happy with the luggage space, cleanliness and comfort. London Midland has a slower, but more frequent, service.

For Newcastle, the Tyne and Wear Metro serving the airport had the second highest customer score. Passengers liked the service, frequency and value of a £3.20 ticket from the city centre.

For Manchester, First TransPennine Express services were rated highest – the customer service and frequency were praised. Northern Rail services to the airport got poor ratings for cleanliness and comfort.