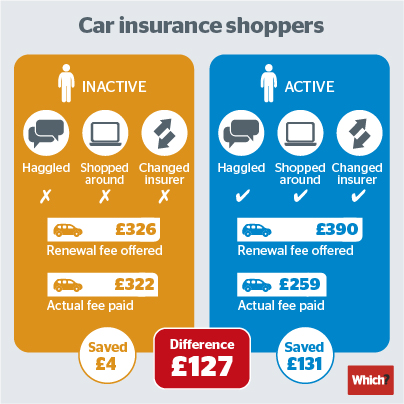 Which? launches a new campaign calling on insurance companies to show last year’s premium alongside renewal quotes, as people tell us it would prompt them to look for a better deal.

The majority would like to see last year’s rate

New Which? research finds that the majority of consumers support having their previous premium on their renewal quote, with nearly nine in ten (85%) saying it would be useful.

Six in ten (62%) find it annoying that it is not included and only 7% think it would be hard for companies to do.

Without this information, people lack the incentive to shop around as they’re not able to easily see if they’re paying more and why.

Two-thirds (68%) say having last year’s premium would prompt them to look for a better deal with other insurers, and around the same (64%) say they would be more likely to haggle for a discount if they had this information.

Clearer information can help people to shop around

Clearer information would empower consumers to more easily compare quotes and could help them save money.

The ‘Don’t pay a premium’ campaign is calling on insurance companies to provide last year’s premium alongside the renewal quote and explain any differences. We also want insurers to provide customers with their number of years of no-claims-bonuses and make sure renewal letters are received by the customer at least three weeks before the insurance is due to renew.

Only one of the major insurers, Swiftcover, already provides last year’s premium on car insurance renewal reminders but there is no reason why other companies can’t follow this approach.

Savings of £127 on your car insurance

A separate survey of Which? members reveals that people who haggled, shopped around and switched providers on their car insurance managed to save an average of £131 on their renewal offer while those who did nothing paid just £4 less. Those who switched providers saved £105 on average.

People who were happy to stay with their current insurer, but took the time to question the renewal rate and haggle for a discount, saved £38 on average. Which? found that nearly half of people in our survey (44%) had questioned their renewal offer.

Insurers should be more up-front on renewal notices

Which? executive director, Richard Lloyd, said: ‘Our research shows it pays to shop around when renewing your insurance, and that’s good for all consumers too as it helps keep the market competitive. But it’s not easy to find a good deal if you don’t know what you paid last year.

‘People have told us that if insurers made it easy to find out the cost of their old premium it would prompt them to look for a better deal or haggle for a discount. So we’re asking people to support our campaign calling for all insurers to be more upfront when they send out renewal notices by showing customers the premium they paid last year and explaining any differences.’