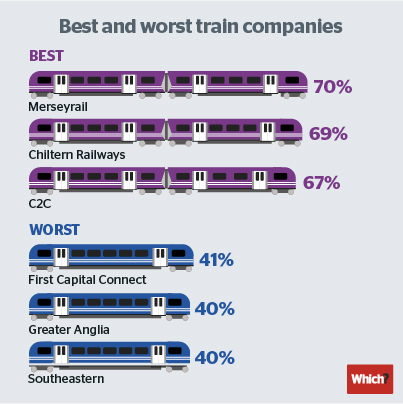 Merseyrail is the highest rated UK train company and the first to become a Which? Recommended Provider.

But new Which? research reveals that satisfaction with many train companies is low as more than half fail to score more than 50% in the annual Which? trains satisfaction survey.

Merseyrail passengers like the frequency, punctuality, reliability and speed of its trains. And a quarter of its passengers say that services have improved over the last two years. Chiltern Railways and C2C also did well on 69% and 67% respectively and Virgin Trains, winner in 2012 and 2013, scored 64%.

But 11 of the 19 companies we looked at had a satisfaction score of 50% or lower, with Greater Anglia and Southeastern scoring just 40% and First Capital Connect on 41%.

One in ten passengers told us they had cause to complain about the last journey they had taken but three-quarters did not bother to complain.  Of those who did complain, more than half were dissatisfied with how it was handled.

In response, Which? is encouraging frustrated passengers to complain about their train experience, and find out free information on their passenger rights and what compensation is available.

Which? executive director, Richard Lloyd said: ‘It’s disappointing to see some train companies consistently falling down on the basics of customer service, with dirty and overcrowded carriages and toilets that don’t work.

‘Seven rail franchises end in the next two years and we want to see passengers’ experiences put right at the heart of the tender process so companies respond to consumer expectations and can be held to account if they don’t.’

We asked passengers which three things would improve their journeys and what they would be prepared to pay more for. Lower ticket prices were top of the wanted list on 60%, with 35% of passengers also wanting to see more carriages at peak times and 29% wanting promotions on ticket prices. Around one in ten passengers told us they want cleaner trains. First Capital Connect and Greater Anglia scored just one star for cleanliness on commuter journeys.

Despite eight in 10 passengers telling us that train ticket prices are too high, 53% said they didn’t mind paying more for tickets if they saw an improvement in the services they receive.

The Which survey, of over 7,400 regular train passengers across all of the major train operating companies, compiled scores based on passengers’ overall satisfaction with a company and whether they would be likely to recommend it.