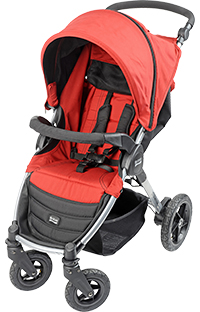 Britax is offering a hinge cover kit to UK customers for some of its B-Agile pushchairs and the B-Motion 4 pushchair following several finger injuries in the US.

You can find reviews for Britax pushchairs, including the Britax B-Agile 3 and Britax B-Motion 4, in the Which? pushchair reviews, where you’ll find 180 different models to choose from.

If you’re not a Which? member, join Which? today to unlock all of these reviews, as well as give you access to the rest of the site.

Not all Britax pushchairs are affected, but the following models could have an issue:

The B-Motion 3 is not affected.

It’s still safe to you use your pushchair, but Britax advises you to follow the user guide instructions when folding it down and to remove your hands from the frame while pulling up the pushchair release strap. 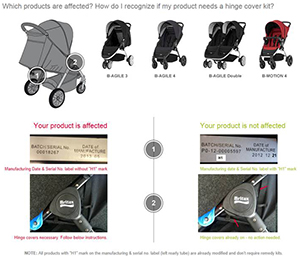 What to do if you’re worried about your Britax pushchair

For anyone worried their pushchair may be affected, a dedicated website (www.quality-initiative.eu) has been set up for consumer, giving details of how to check your pushchair, what to look for and a form to order a hinge cover kit.

You also find out by checking the serial number label found on the back leg of the pushchair near the wheel. Those marked with H1 are not affected.

Read all our Britax pushchair reviews.

As well as completing an expert assessment of each model, we also get our parent panel to try out and rate each pushchair with their child.

Whenever we uncover safety issues we push for positive change, to improve the market for all parents.