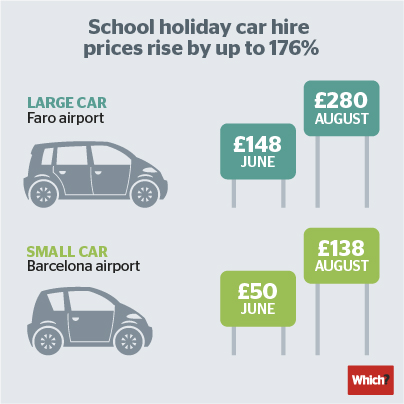 Car hire prices in Europe and the United States rise by as much as 176% between June and school holiday time in August, new Which? Travel research reveals.

Our findings on car prices follow earlier research that showed package holiday prices jumped by as much as 30% from the final weeks of school term time to the start of the holiday period.

The debate over school holiday price increases has been getting more heated since rules about taking children out of school for holidays were tightened, leaving parents liable for fines if they holiday in term time. MPs are due to debate the issue in Parliament on Monday 24 February.

If you’re heading off on holiday find out which tour operators scored highly in our travel companies survey.

The biggest price rises we found were when hiring a small car from Barcelona airport. The average starting price for a 50-year-old driver was £50 for a week in June. But in August this increased by 176% to £138. And at Malaga airport prices rose from £49 in June to £123 in August, an increase of 152%.

Car hire prices in the United States aren’t hit as badly by mid-summer price-hikes. Car hire in New York is pricey all-year round, but we found that in August, average prices were £26 (14%) higher for a small car and £31 (16%) higher for a large one than they were in June. This means that August average car hire costs work out to be £205 for a small car and £223 for a large one.

Our research on car hire follows earlier findings that the extra cost of taking a break in school holiday time can be higher than the fines for taking children on holiday during term time.

Under tightened rules, parents who take children on holiday without permission face fines of £60 per child per period of unauthorised absence. But when we took a snapshot of holiday prices in the weeks leading up to the 2014 summer holidays in England, we found 11 of the 12 holidays we looked at would be cheaper in term time even after paying the fines.

We looked at holidays from Thomas Cook and Thomson for a family of four and found that prices rose by as much as 30% from a holiday starting two weeks before the end of the summer term in England to one starting in the first weekend of the school holidays.

If you do have to go away during the school holidays, try to reduce the cost by flying midweek rather than at weekends. We found Tuesday is the cheapest day to fly.

And don’t be afraid to bargain with travel agents. Use our guide to find out how to successfully haggle down the price of your holiday.

We looked at average weekly car hire costs for small and large cars in Italy, Portugal, Spain and the US for 12 months, using prices gathered from Skyscanner.com in January.  The prices shown are the average monthly prices for each car type and destination. They do not include extras such as excess waiver fees.

For package holidays, we looked in November at prices for 12 holidays from Thomas Cook and Thomson for a family of four to Egypt, Greece, Mallorca, Portugal, Tenerife and Turkey