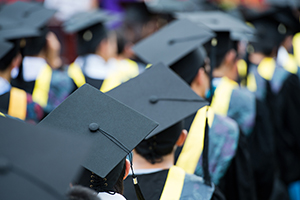 The average starting salary for graduates in professional employment dropped by 11% from £24,293 to £21,702 in real terms between 2007 and 2012, according to a study by The Complete University Guide.

It used official data based on employment and earnings six months after graduation and suggests that this decline is continuing and perhaps increasing, against a backdrop of university tuition fees rising.

According to the research, even medicine and dentistry graduates – who had the highest starting salaries in 2007 – experienced a drop of 15% and 9%, respectively. Only two subject areas showed an increase in starting salaries – materials technology (13%) and librarianship and information management (3%).

The study also found significant variation in the average graduate earnings ‘premium’ – the difference between starting salaries for graduates and non-graduates – between subject areas.

While building graduates saw the biggest increase with their relative earnings growing by three-quarters (77%) followed by librarianship and information graduates (72%), for many arts and humanities subjects the graduate premium narrowed considerably. Law graduates saw a relative pay drop of 20%, while the premium for English, French and Iberian language graduates narrowed by 26%.

Which? University research has found improving employment prospects are the main reason students go to university, yet many don’t have access to quality information about graduate jobs to help them make an informed decision.

With graduate salaries falling and tuition fees increasingly near the £9,000 cap, it’s more important than ever that students know they are getting value for their money. We want to see more information about employment performance, beyond the current six months post-graduation.