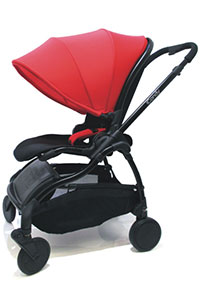 The iCandy Raspberry is an urban travel system, costing £420

Pushchair brand iCandy will be launching its lightest ever travel system buggy this summer. Our pushchair researcher takes it for a spin to bring you her first impressions while we wait for full lab test results.

iCandy is a premium buggy brand and we’ve been impressed enough with some of its pushchairs to make them Best Buys in the past. The new iCandy Raspberry is designed to make it easier for parents to get around in the city, but does it live up to this expectation? And is it good enough to justify its price tag?

Together with the hood and pushchair harness the Raspberry will cost £420. This means it is more expensive than the slightly heavier iCandy Cherry pushchair, but cheaper than iCandy’s other travel system pushchairs.

Ahead of our full lab test our Which? pushchairs expert has looked at how easy the Raspberry is fold and store as well as whether it might fare well in an urban environment. To get our expert’s verdict read our first look review of the iCandy Raspberry pushchair. Which? Members can log in to view the review, and if you’re not yet a Which? member you can sign up to unlock this pushchair review and hundreds of others across the site. Read on to find out about the iCandy Raspberry’s features.

The Raspberry is the lightest pushchair in iCandy’s range – iCandy claims it weighs just 8.4kg. It comes with a range of features including a ‘lie-flat’ seat, which iCandy says makes it suitable for newborns – we’ll measure the exact angle of the reclined seat in our lab.

The pushchair can be folded down from any of its three recline positions and in both parent-facing and forward-facing mode, making it really flexible. It also has an SPF-50 hood and a shopping basket that iCandy says can hold up to 5kg.

How we test pushchairs

At Which? we’ve tested hundreds of pushchairs over the years. We spend more than £70,000 a year on testing pushchairs. Our tests are designed to help you buy the right pushchair for you, making your life as a parent a little easier.

In our labs we look at the strength, durability and safety of the pushchair. Our researchers also test the comfort and usability of buggies, for both parent and child.

Our parent panel then uses each pushchair with their children and rates each pram on how easy it is to push and use on bumpy ground, stairs and escalators. Read our pushchair reviews to see test scores for all the pushchairs we’ve tested.

• Tempted by an iCandy? Read our full reviews of iCandy buggies