For the most part, sat navs are are an invaluable bit of kit. Eliminating wrong turns, badly folded maps, and asking locals for directions. However, some of you have been in touch to complain about their limited battery life.

This got us thinking, and we decided to see how far we could (hypothetically) drive with five sat navs, setting off from the Which? offices in London. The results were surprising.

While most people would never give a second thought to battery life – plugging their sat nav into the cigarette lighter and going on their way – we’ve heard from many of you who don’t want to plug them in.

You’ve given us plenty of reasons too; you want to free up the cigarette lighter, use the sat nav when out walking, or the most common complaint, want to rid your car of trailing wires. The question then, is how far can you go with your sat nav unplugged?

Our sat nav testing is extensive – every year we tackle hundreds of roundabouts, deliberately take wrong turns, and drive mile-after-mile, so we can tell you just how good the models are. We also record the battery life (although we’ll admit it’s not the most exciting part of the test). It’s just as well we do, because it’s rare for manufacturers to tell you just how long a sat nav will last from a single charge.

We’ve picked the best and worst of the sat navs that we’ve test over the last few years, and looked at how far we’d get if we set off from the Which? offices. 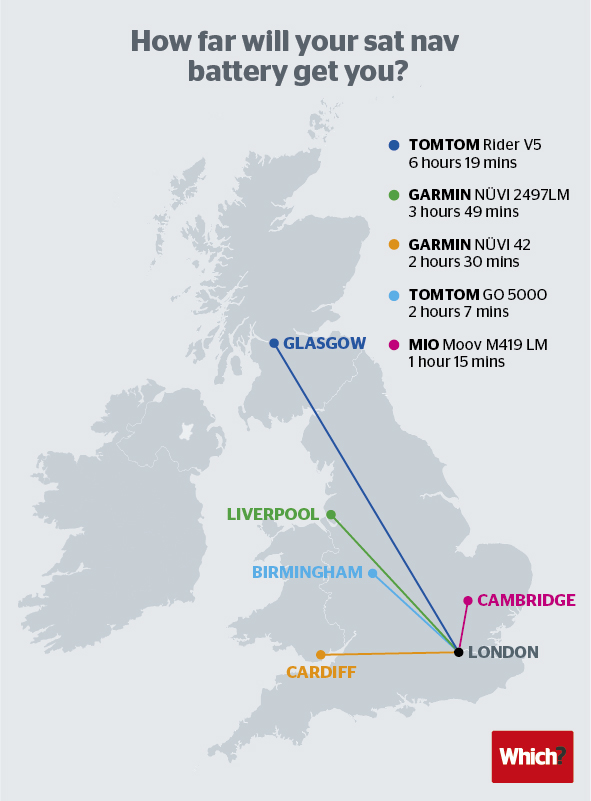 The shortest distance we could go was to Cambridge. The Mio Moov M419 battery will last about 1 hour and 15 minutes – fine if you’re popping to the shops, but no good if you’re looking to explore the British Isles.

The Garmin Nuvi 2497LM fares a lot better, and can get you all the way from London to Liverpool on a single charge, at just under four hours battery time.

Read our full review of the Garmin Nuvi 2497LM

The TomTom Rider V5 however comes in at an impressive 6 hours and 19 minutes. That’s long enough to get you to Glasgow. As the name suggests the TomTom Rider V5 is designed specifically for motorbikes, and it’s perhaps unexpected that its battery life is so good, considering that plugging it in is a lot more involved than it is for car users (it needs to be hard wired to the bikes battery). Still, if bikers can get that sort of battery life, why can’t drivers?

We’ve chosen the most best and worst examples to give you an idea of the sheer disparity of  battery length, but we would expect a good sat nav to give you at least two-and-a-half hours of juice.