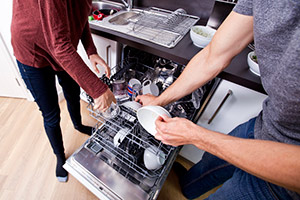 844,000 Bosch and Hotpoint dishwashers have been recalled

The dishwashers contain a faulty electrical component which can overheat, potentially causing fires.

You can search for dishwashers that have aced our rigorous lab tests using our dishwasher compare tool.

The dishwashers in question were all manufactured by Bosch, but Hotpoint sold some models under its own branding.

To check your dishwasher’s model number, look at the sticker inside the door. It’s advisable to switch off and unplug your dishwasher before checking.

Which? reported the problem in 2012

We raised concerns over the proportion of household fires attributed to Hotpoint dishwashers in 2012. Hotpoint recalled the FDW20, FDW60, FDW60A models in April 2013 (although it contacted some owners in October 2012). In July 2013 we raised further concerns with Hotpoint specifically about the DWF3 range. It wasn’t until November 2013 that Hotpoint issued safety recalls for the DWF3 and DC26 affected models.

Hotpoint said about DWF3 and DC26 ranges: ‘We always work in close consultation with the relevant industry safety bodies and initially, due to the age of the appliances involved and the relatively small number estimated to still be in use, it was not deemed necessary to initiate a repair programme.’

When we test dishwashers, we look at how easy they are to load and use, how noisy they are and whether they’ve been built to last.

We smear dishes with minced meat, eggs, oat flakes, milk, spinach, tea and margarine to see whether the dishwasher on trial is able to tackle these classic tough stains.

Topshop owner Arcadia on the brink of collapse – what do customers need to know?