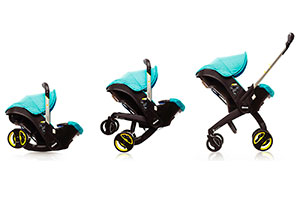 The Doona is a child car seat and pushchair in one

The Doona is a pushchair that can be converted into a car seat and back again.

The £299 price tag means it could potentially save you money compared with separate child car seats and pushchairs, or a travel system.

Made by Simple Parenting, it’s suitable for infants from birth up to 12-15 months (Group 0+).

Read our review of the Simple Parenting Doona pushchair.

Which? Baby expert Lisa Galliers said, ‘The Doona is an innovative idea and one that will appeal to many new parents. We can see the appeal to those who regularly nip to the shops and don’t want a pushchair taking up valuable car boot space.

‘But, however innovative this product is, a worry is that this hybrid may tempt parents into keeping their little ones strapped into the car seat much longer than they should be.’

Current advice is not to leave a baby in a car seat for longer than necessary as it can cause issues with breathing. Newborns can’t support their large heads because their neck muscles are too weak and being hunched over can cause their lungs to be less efficient.

As the Doona is either a car seat or a car seat on wheels, you shouldn’t be tempted to let your child rest in the seat for long periods of time whether it’s in puschair or car seat mode – and certainly don’t use it as an impromptu cot.

Simple Parenting warns on its website that children should not be left in the seat for an extended period of time. 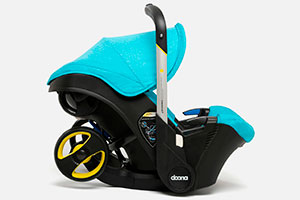 Worried about mud? Wheel covers are sold separately – don’t be tempted to put down a towel instead.

The Doona has passed the European safety regulations for both pushchairs and baby car seats, and according to the company’s best knowledge, is the only baby transport to have passed both.

Can you leave your child in the seat while it transforms?

We asked CuddleCo, the UK distributor of Doona, if you can leave your child in the seat while you transform the car seat into a buggy or vice versa, but so far they have not provided an answer.

If you can’t leave the child in the seat, that could take away from the convenience the two-in-one pushchair and car seat offers. We’ll update this story when we get an answer from CuddleCo.

Don’t be tempted to cover your seat

When collapsing the buggy into a child car seat, the wheels will tuck up underneath the chair. If you’re worried about transferring dirt from the wheels to your car – don’t be tempted to lay down a towel or cloth over the seat, as this is not safe.

Instead, you’ll be able to purchase wheel covers for £9.99. The covers should help keep your car clean without having to put anything between the Doona and the seat you put it on.

The Doona is available from the 1st July 2014 – though you can pre-order it now and it comes in seven different colours.