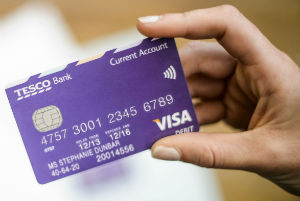 The retail bank becomes the first new provider to enter the market since the launch of the Current Account Switching Service last year.

It may well appeal to some consumers who are looking to switch as it offers competitive rates on accounts that are in credit as well as on authorised overdrafts.

Which? executive director, Richard Lloyd said: ‘This new Tesco account is likely to appeal to the many customers fed up with shoddy service elsewhere, with decent interest for those in credit, competitive authorised overdraft charges, and a reward scheme that will be helpful for Tesco shoppers.

‘As always, people should look carefully at how they use their existing current account before deciding if this is the best choice for them.’

Go further: Best bank accounts – see how Tesco Bank compares to the rest of the market

How does it compare?

Tesco Bank account holders who stay in credit will be rewarded with 3% AER variable interest on credit balances up to £3,000, as long as they deposit more than £750 per month. Those who deposit less than this will be charged a £5 monthly fee.

The only current accounts which can match or better this rate either require bigger monthly deposits or charge a monthly fee regardless of how much cash you pay in.

Cardholders will also receive one Clubcard point for every £4 spent in Tesco and for every £8 spent elsewhere.

The annual cost for a customer using an authorised overdraft for two weeks each month is £40.

Customers can also make use of automatic text or email alerts to warn them they can avoid a charge if they pay in or transfer sufficient funds by 5pm the same day.

Tesco Bank provides an online calculator to let customers clearly see the interest they will pay for using their arranged overdraft.

It will also show customers what their money could have earned if they had moved deposits not earning interest to a Tesco Bank savings account.

Customers can make deposits in 300 Tesco stores, as well as managing their account over the phone, online or via a mobile banking app, which can synchronise with users’ smartphone calendars.

Richard Lloyd added: ‘It’s good to see more choice on the high street, where so few big banks have dominated for so long. Serious competition from new players offering more transparent and consumer-friendly services will help shake up banking for the better.’