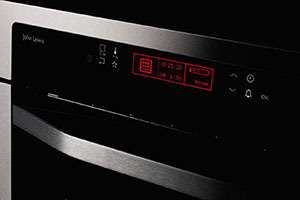 John Lewis has revamped its popular built-in oven range, with a key change inspired by Which? member feedback.

After comments from Which? members on the previous range of John Lewis ovens, John Lewis has relaunched its range, supposedly making the ovens new and improved.

If you want to find out how well the current John Lewis range of built-in ovens did in our tests, and compare them with others, check out our built-in oven reviews.

If you’re not a Which? member, you can get access to our reviews, from ovens to washing machines, by signing up for a £1 trial subscription to Which?.

How John Lewis has improved its ovens

All our reviews give Which? members the opportunity to leave comments on appliances they own. Our members told us that the clarity of the display on the John Lewis ovens was poor, and that the controls were difficult to read – and John Lewis listened.

Vic Sinclair, buyer for large electrical appliances at John Lewis told us: ‘Our new generation of appliances have evolved in part as a result of the reviews from Which? readers. We have kept everything they love and made improvements where necessary – such as making our displays bigger, brighter and easier to read. We like to think we have thought of everything, but the real test is when a customer uses the product day in day out and tells us what they think.

Which? gives consumers a platform to do this, providing an invaluable insight.’

Which? opinion on John Lewis ovens

John Lewis appliances have proven in the past they can hold their own against major brands, and we look forward to seeing how these new models do in our tough cooking tests.’

Several ovens from the revamped range will be tested over the next few months – look out for the results online in August.