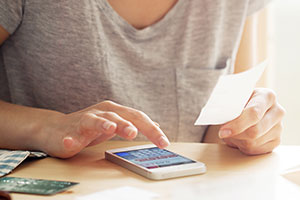 One in six people who have used their mobile phone on holiday abroad in the last year have been shocked by a high mobile phone bill, a Which? survey has found.

Of these, one in four were charged more than £40 above their usual monthly usage.

From midnight tonight, the EU’s Roaming Regulation will lower the price caps for data downloads when you are travelling within the European Union.

But there’s a lack of knowledge about these caps and what they mean.

Nearly half of those surveyed thought the price caps applied to all countries within Europe – unfortunately they don’t. The caps only apply to those nations within the EU.

Which? executive director Richard Lloyd said: ‘Capping EU mobile roaming charges is welcome news for millions of travellers, especially those who have faced expensive charges for data roaming when their mobile hasn’t even left their suitcase.

‘Consumers travelling within the EU should now be much clearer on the charges they have to pay.’

If you receive an excessive bill after travelling abroad, see our guide on the Which? Consumer Rights website.

The maximum charge for outgoing calls, excluding VAT, will now be 19 cents per minute, six cents for outgoing text messages, and 20 cents for a MB download of data.

These caps will only apply to the nations within the EU. Ten cents is equivalent to eight pence Sterling.

In our survey of 2114 UK adults in June 2014, nearly half of people didn’t know that the price caps don’t apply to the whole of Europe.

Four in ten people said they didn’t know they had a right to challenge their mobile phone provider if they received an excessive bill after using their phone abroad.

And a further 48% of people didn’t know that if they have capped their mobile phone usage with their provider, they can refuse to pay the bill for their phone usage above the cap level.

If you’re stung by a bill, get in touch with your service provider.

If talking to your mobile phone provider fails, CICAS or Ombudsman Services: Communications may be able to help. See our guide on taking your complaint to the mobile phone ombudsman.