Which? is recommending parents do not buy the Axkid Duofix Group 1/2 car seat after it achieved a poor score in some of our car seat crash tests.

The Axkid Duofix car seat is a Group 1/2 seat that’s suitable for children who weigh from 9kg to 25kg (approximately nine months to six years old). It can be installed using either the Isofix connectors or the car’s adult seatbelt, and it can be used in four different ways, including as an extended rear-facing car seat for children up to 25kg.

Although this seat has passed the legal safety standards (R44/04) for child car seats, in our own more demanding crash tests, it scored just 25%. These tests include a side impact crash that’s not part of the current R44/04 standards.

Story update: 19 March 2019 – this car seat is no longer available. See our full list of other Don’t Buy child car seats, some of which have failed our tests for safety reasons you need to know about.

Our full guide to the best child car seats. reveals the models that have passed these tests with flying colours that we recommend.

The Axkid Duofix is a don’t buy child car seat and if you already own it, we recommend you replace it as soon as you can.

When secured by its harness and used as a forward facing group 1 seat, crash protection is poor.

When the seat is used as a forward facing group 2 high backed booster seat, front impact protection is also poor.

The seat belt routing doesn’t hold the adult belt firmly enough, meaning that in a real crash there is a high risk it could slip and cut into your child’s neck.

At Which?, we test child car seats in front and side impact crash simulations. Both tests are developed from Euro NCAP crash test loads, which are based on typical real-life crashes.

Our results suggest that a child using the Axkid Duofix seat, when installed as a forward-facing Group 2 seat, would be at high risk of injury in the crashes we simulated due to the adult belt moving up towards the neck during a crash.

For this reason we don’t recommend that you buy it. 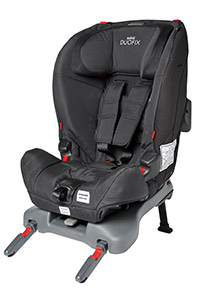 The Axkid Duofix car seat is a Which? Don’t Buy car seat

The Duofix seat also scored poorly during the front impact crash testing when used as a Group 1 seat. The side impact crash test results were satisfactory in this format, but because a car seat should provide good protection in both a front and side impact crash- the most common types – the overall Which? test score is limited to the worst case score, which is 25% in this case.

How Which? tests car seats

Over the years our car seat testing  has revealed big differences between child car seats. Some protect babies and children well, but others expose them to the risk of serious injury.

Which? is the only child car seat review website that actually tests child car seats in two crash simulations: a front crash, equivalent to a head-on collision at around 40mph, and a side crash.

Which? child car seat testing is unique because…

Which supermarket own-brand nappies do parents rate better than Pampers?

How to get a baby monitor that’s easy to use

Baby slings and carriers for life on lockdown