Which? is advising parents who own the ABC Design Risus Group 0+ baby car seat with Isofix base to replace it as soon as possible after this seat achieved the lowest possible score in our independent child car seat tests.

Visit our page to discover the seats which have passed our tests with flying colours.

The ABC Design Risus Group 0+ car seat is available to buy in the UK market in two formats. As a car seat, or as part of a two piece package with an Isofix base.

Although it has passed the legal safety standards for child car seats (ECE R44/04), the version available with the Isofix base scored 0% overall in our more demanding crash tests. These include a side impact crash that’s not part of  ECE R44/04.

Take a look at our video to see why we have made it a Don’t Buy.

The ABC Designs Risus is a don’t buy when used on its Isofix base, and if you already own it, we recommend you replace it as soon as you can.

At which, our child car
seat testing goes further than the minimum European standards required by law, and our 40 mph frontal crash alarmingly revealed that the Risus could detach from its Isofix base and let your child fly forward into the front of the car, immediately earning this seat a 0% score.

Even in the side impact test, the Risus didn’t provide anywhere near enough protection allowing the child’s head to impact with the side of the car. To find out which car seats are best buys, and up to the job of protecting your child, sign up for ?1 to unlock all our reviews

Which? members read our full review of the ABC Design Risus 0+ Isofix for detailed information on exactly why this car seat did so badly in our crash tests.

Because you need a seat that provides good protection in both a front and side impact – the most common types of crash – the overall Which? test score is limited to the lowest score that the seat achieved.

And because the seat detaches from the Isofix base, the overall test score is immediately reduced to zero (0%). 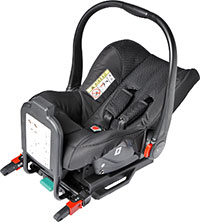 The ABC Design Risus installed with Isofix is a Which? Don’t Buy car seat

Which? tests car seats in front and side impact crash simulations. Both tests are developed from Euro NCAP crash test loads, which are based on typical real-life crashes.

Our results indicate that a child using the ABC Design Risus Group 0+ car seat with the Isofix base would be at risk of serious injury in the crashes we simulated.

Other car seats that we’ve tested, particularly our Best Buys, do a better job of restraining a child and reducing the forces placed on a child’s body in a crash.

This car seat is also sold on its own without the Isofix base. In this format it scores 48% which is higher than our 40% Don’t Buy cut off.

Our full review of the ABC Design Risus 0+ car seat reveals the differences between this model and the Don’t Buy version.