The latest figures on how many complaints the energy providers receive show that complaints are on the rise again. Npower is still worst – it received 450,000 complaints in the first three months of 2014 alone.

A staggering 1.7 million complaints have been made to the major six energy providers in the first three months of 2014. This is the highest quarterly number of complaints received by the energy companies since consistent recording began at the end of 2012.

Between them, the major six energy providers – British Gas, Eon, EDF Energy, Npower, SSE and Scottish Power – cover about 95% of the market. They received over 5.5 million complaints in 2013.

And the first quarter of 2014 already sees an increase of 15% over the same period last year.

Which? thinks this is yet another example of a market which isn’t working for consumers and is calling for radical changes. You can help, too – click to find out more about our Fix the Big Six campaign. 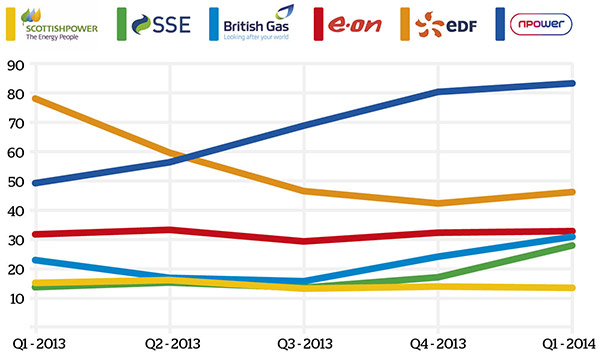 Quarterly number of complaints received by the major six energy suppliers (per 1,000 customers)

Of the big six, Npower is still worst, receiving as many as 83 complaints for every 1,000 customers.

Npower reported a glitch with its billing system and was fined £1 million for it at the end of 2013. This glitch didn’t go unnoticed by Npower’s customers, with many complaining that they were hit by a large bill after having not been billed for months, leading to high levels of debt. In the first quarter of 2014, the energy firm said that issues around billing represented 70% of the complaints it received.

Npower also did very badly in our satisfaction survey of the energy companies. It ended up at the bottom of the table of 17 energy providers. See how energy companies have been rated by their customers in our review of energy suppliers.

Which? has been tracking the number of complaints received by the big six as the information is now available in a comparable format on the suppliers’ website after Which? asked for it back in 2012.

But just publishing the number of complaints they receive is not enough. We want energy companies to get to the bottom of the reason for the complaints and then stop it happening again. These complaints figures show the energy market is not working for its customers, so Which? is calling for radical reforms to the energy market.

Which? executive director Richard Lloyd said: ‘Yet again millions of customers are being let down by poor service from the big six energy companies. This has to change. If they want to improve the low level of consumer trust in the energy market, suppliers must up their game now, rather than wait for the results of a competition review.’

Find out more about our Fix the Big Six campaign and sign our petition to change the energy market.