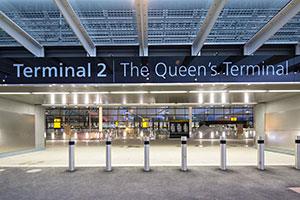 Today Her Majesty The Queen officially opens Heathrow’s £2.5 billion Terminal 2 – also known as the Queen’s Terminal. We toured the terminal ahead of its opening. Read on for our first impressions.

Terminal 2’s previous building was the first to open at Heathrow in 1955 with a capacity for around 1 million passengers. By the time it was demolished in 2009, its customer score was just 34% in the Which? UK airports survey.

The new terminal has the capacity to handle 20 million people a year, and by the end of 2014, there will be more than 300 daily flights to 54 global destinations.

Whereas the old terminal suffered from claustrophobically low ceilings and only artificial light, the new T2 has a high undulating roof that allows in plenty of natural light. Ten metre-high windows complement this and make it great for watching planes and for orientation.

Directional signage is clear and way finding is intuitive, as each stage can be seen from the previous one. Some of the prominent flight information boards also helpfully include a map of the terminal.

The toilets look smart with hand driers hidden behind sink mirrors, and dozens of drinking water fountains are available if you’re reluctant to pay for airport-priced bottled drinks. However, the seats seem rather low-budget and aren’t conducive to long periods sitting down.

Airport security and beyond

There are more security lanes than at Terminal 5, although few were staffed during our visit as passenger numbers are still quite low.

Distances are typical for a large airport. The walk from security to the departure gate can take up to 15 minutes if you’re flying from the satellite B terminal, which also has retail outlets – though only vending machines at the most distant gates.

As with Heathrow’s other terminals, you can still get plastic bags at security free of charge – it’s also still free to drop off passengers and use trolleys.

Once you’re airside, familiar retail names over two floors include John Lewis, with its first ever in-airport store, and upmarket stores such as Harrods and Gucci. Passengers can also book in a free session with a personal shopper, and outlets have departure screen information prominently displayed.

If you’re hungry and want something more substantial than Boots or WHSmith snacks, there’s a good number of options, including Fullers Brewery’s attractive café and wood-fired pizzas at Heston Blumenthal’s Perfectionists’ Café. Every restaurant offers some dishes that are guaranteed to arrive within 15 minutes, and the option to take the meal on board the flight.

There’s a staffed soft play area for young travellers, plenty of places where you can get 90 minutes of free wi-fi usage, and there are four airside internet pods with 20 minutes free access to screens.

The arrivals process all takes place on one floor and once you’ve passed through the vast immigration hall, the walk through baggage reclaim to the arrivals hall is short.

Which airlines will be at Heathrow T2?

Learning from the problems faced at the opening of Terminal 5, when it struggled to cope with the high number of British Airways routes beginning from there on the same day, Heathrow has staggered the dates when airlines start flights from Terminal 2 (T2). Last week, Air Canada, ANA and Air China joined United Airlines in launching flights, and others will follow over the next five months.

All but three of the 26 airlines moving into T2 belong to the Star Alliance, including Air New Zealand, Lufthansa and Singapore Airlines. They will be joined by Aer Lingus, Germanwings and Virgin Atlantic’s domestic airline Little Red.

You can see how airlines such as Air New Zealand, Lufthansa and Singapore Airline compare in the full results of our airlines survey.

If you have booked tickets to fly from or into Heathrow this summer, check the airline or airport website to see whether the terminal has now changed.