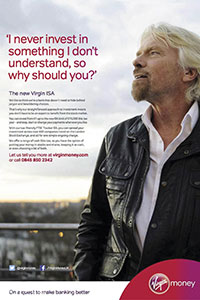 Sir Richard Branson has told Which? he is ‘proud’ to endorse a Virgin investment fund that charges ten times the cheapest rate to track the UK stock market.

A Which? Money investigation has found that the Virgin UK Index fund, which charges investors 1% a year in ongoing charges, would have turned £10,000 into £17,520 over the past five years. A cheaper alternative, such as Vanguard’s FTSE UK Equity Index, would have delivered almost £2,000 more over the same period.

The Vanguard fund, along with others charging around 0.1%, is available through fund supermarkets, meaning investors can track the FTSE All Share index at around a third of the cost offered by Virgin, after factoring in fund supermarket charges.

Find out more: Fund supermarket reviews – we have rated 14 of the major players in this market

It is now possible to invest up to £15,000 into an Isa for the current tax year, with new rules also meaning it will be easier to switch between cash Isas and riskier stocks and shares options. A consequence of the rule changes has been a flurry of marketing activity from providers.

A Virgin press advert, right, includes Sir Richard’s image and states: ‘With our tax-friendly FTSE Tracker Isa, you can spread your investment across over 600 companies listed on the London Stock Exchange, and all for one simple ongoing charge.’

The advert does not state what that charge is.

Find out more: Stocks and shares Isas explained – the Which? guide

Sir Richard Branson told Which? that other funds do not ‘welcome the mainstream, mass-market investor’ like Virgin does, with its low monthly minimum investment of £1 and its ‘transparent’ charge.

‘I have always personally endorsed our UK All Share fund and proudly continue to do so,’ he said.

When asked about the Virgin fund’s inferior performance, Sir Richard said: ‘I simply do not believe this to be true.’

He argued that the fund has consistently met its stated objective to closely match the performance of the index.

Which? analysed 11 funds, with at least a five year track record, that aim to track the FTSE All Share index and found that the Virgin fund delivered the worst return over the five years to 30 June 2014. Virgin’s 1% charge, the joint highest of the 11 funds, will have been a drag on performance over this period.

Find out more: Tracker funds – find out more about how these investments work