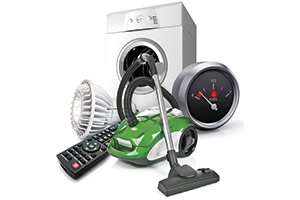 Tumble dryers that leave clothes sopping and smart TVs getting dumber are among the most frustrating product flaws Which? members encounter, according to our latest investigation.

Our in-depth testing reveals the truth behind manufacturers’ claims and regularly exposes frustrating product flaws. To find out which product flaws irritate you the most we asked more than 1,000 Which? members to rank the issues we’ve uncovered in terms of how frustrating they are.

Below we round up your top product pet peeves according to this survey. For more details, including affected products and what you can do if you own one, Which? members can read the full article ‘Five frustrating flaws in everyday products’ in the September issue of Which? magazine. If you’re not yet a member, sign up for a £1 trial to get instant access to our magazine archive and all our online test results.

Automatic tumble dryers use a sensor within the drum to monitor how much moisture is in your clothes. Once it detects clothes are dry, it should stop the drum automatically.

A good sensor should ensure that clothes are not left wet, which is annoying, or over-dried, which wastes time and electricity by heating clothes when they are already dry. But our tests show that many dryers are stopping early.

Following feedback from consumers, each of our Which? tumble dryer reviews tested since 2013 include a star rating for ‘Dryness of clothes’ to guide your to the best automatic dryers that leave clothes well dried.

Smart TV owners are seeing their TV apps and online services disappear – services they may have bought the TV for in the first place.

Several big name brands have been affected by apps disappearing from their TVs at some point – although some have returned. One of the most noticeable losses was the disappearance of the popular LoveFilm movie-streaming service from selected smart TVs made in 2010 and 2011.

Read reviews and ratings for the best smart TVs.

3. Light bulbs that are not as bright as they claim

Light bulb packets show how bright the bulb should be, measured in lumens. But our tests uncovered several bulbs are simply not as bright as they claim to be.

The worst offender from this year’s test produces a beam of light that is 35% dimmer than claimed.

Shopping for bulbs this weekend? Discover our recommended best light bulbs that live up to their claims.

4. Bagless vacuum cleaners claim no loss of suction, but our tests show they do

Several bagless vacuum cleaners are claimed to ‘never lose suction’, but in our tests, this wasn’t the case.

Manufacturers of some of the affected models told us that their ‘no loss’ claims only apply if you observe the ‘maximum fill’ line on the canister – but confusingly, this is much lower than the total stated capacity.

We test all the latest vacuums for how well they clean and handle, as well as how easy they are to empty and use. Find out which are the best vacuum cleaners.

5. Advertised mile-per-gallon (mpg) figures not matching up to real life

A big miles per gallon (mpg) figure can be a convincing sell, especially on cars pitched as being environmentally friendly. But our car tests show that mpg figures are too good to be true. One current model is advertised with an incredible 134.5mpg, but only achieved 78.5mpg in our tests, which is nowhere near the official figure.

Why such a big difference? Manufacturers all follow the European Commission-approved mpg tests, so this is a problem that affects every car on sale.

More tips and advice on choosing the best car.

Which? magazine editor Richard Headland said: ‘Consumers tell us they find it frustrating when products don’t live up to manufacturers’ claims, so it is important to know your rights.

‘If you’ve bought a product that’s unsatisfactory you could be entitled to a refund or exchange by law.’