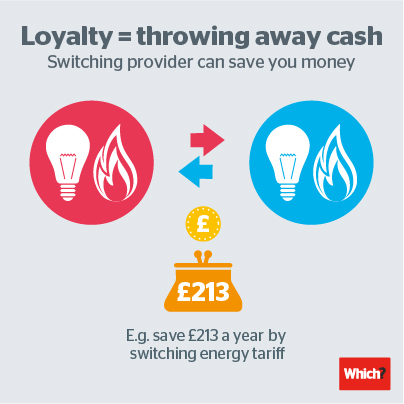 Which? research has found that consumers could be throwing away hundreds of pounds by remaining loyal to the same company for key services, such as energy, savings and insurance. We found that sticking with the same provider could mean throwing away more than £550 a year.

Savings and energy customers missing out on best deal

For savings account holders, we found that if someone had opened a top-paying instant access savings account available in July 2010, and left £10,000 in it for four years they would have lost out on £648 in interest, compared with someone switching to the top-paying account each year. That works out at £162 in lost interest a year.

In the energy market, we looked at a person in the Midlands with medium energy usage (according to Ofgem figures) on a standard variable, dual-fuel tariff with an online account, paying by direct debit. Sticking with the most expensive of the Big Six energy suppliers since July 2010, they would have paid around £852 more than someone switching to the cheapest one-year fixed-rate tariff each year – costing them an extra £213 a year.

Switch insurer to save money

We found people who stuck with the same insurer could be paying more than they need to as well. For car insurance, based on the experiences of 103 Which? members who switched insurers after one year or less, we found people saved £103 on average.

Providers should help people get the best deal

We think providers are still not doing enough to make it easy for consumers to get the best deal. Our ‘Scrap the Savings Trap campaign’ estimates that savers are missing out on £4.3bn in interest each year by leaving savings in poor value accounts.

We’re calling on providers to close ‘zombie’ accounts, and move people’s money into easy-access or Isa accounts at the end of fixed terms. Customers should also be much better informed of their options, with interest rates clearly shown on all statements, on annual summaries and online.

In the insurance market we’re keen to see insurers include last year’s premium on renewal notices – something that the Association of British Insurers wants to see as well. To help keep up the pressure you can support our ‘We don’t want to pay a premium’ campaign.

‘Some people could be saving hundreds of pounds by switching, yet millions of us stick with the same old providers. We want providers to give clearer information to make it easier for people to shop around and find the best deals. In the meantime, the message for consumers is clear: beware, as loyalty often doesn’t pay.’

Go further: Sign up to our ‘Scrap the Savings Trap‘ and ‘We don’t want to pay a premium‘ campaigns