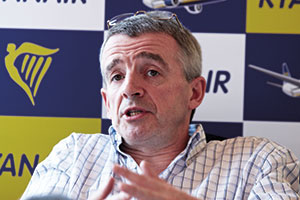 Ryanair boss Michael O’Leary has said the airline will replace the confusing travel insurance menu on its website by the end of the year.

Which? Travel visited Ryanair’s Dublin HQ to put Which? members’ complaints and frustrations to the airline boss, including the fact that they were forced to use a dropdown menu of countries on Ryanair’s website to avoid buying travel insurance when booking a flight.

The full interview with Ryanair’s chief executive appears in the September issue of Which? Travel.

Which? members complained that they felt ‘tricked’ into buying insurance with the current online system, and that the option to refuse insurance was ‘hidden’.

During the booking process, an alphabetised list of countries of residence pops up under the heading ‘travel insurance’. If you don’t want to buy insurance you have to select ‘don’t insure me’, which is found between Denmark and Finland.

Mr O’Leary said there were plans to replace it with clearer ‘don’t insure me’ or ‘insure me’ buttons and he would be surprised if it had not gone by the end of the year.

Mr O’Leary disagreed that the ‘don’t insure me’ option was hidden, and said that 98% of Ryanair’s passengers could ‘find a way to decline insurance’.

But he admitted that Ryanair needed to simplify some policies and would do so as part of improvements to the website and to the customer experience. He added: ‘There’s no doubt that we were at a certain point trying to encourage people to take out travel insurance. I think they should. But whether they take it out on a per trip or annualised basis is up to them.’

Asked if he thought it was a mistake to sell travel insurance in this way, Mr O’Leary said: ‘I think we make lots of little mistakes. But we’re good at correcting those little mistakes as we move along, which is why we have such a high rate of repeat business.’