We take a look at which smart TV apps are on offer from the four main TV manufacturers – LG, Panasonic, Samsung and Sony. From BBC iPlayer and Netflix to Twitter and Facebook, see which brand of TV you’ll need for access to your favourite apps.

The latest generation of smart TVs promise to give you a whole host of apps. While that may be true, how many of them are actually worth using? We’ve taken a closer look at the big four smart TV app stores, to see how many of them include 10 of the most popular apps.

There’s a good turnout for social media apps – Facebook can be found in all the app stores, while Twitter is only missing from LG’s Smart World. It’s a similar story for movie streaming apps, with Amazon Instant Video and Netflix featuring prominently. Unfortunately the same can’t be said for catch-up TV services, with only the BBC iPlayer app available across the board.

Check out the table below to see what’s offered by each app store – though it’s worth remembering that some apps may only be available on later models, as new apps are often added during updates. 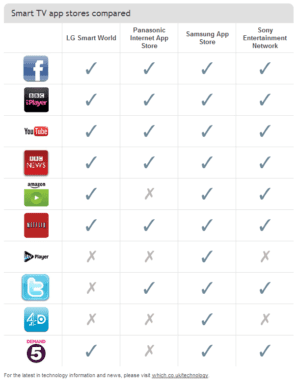 The Samsung App Store is the only place you’ll find all of these popular apps, though rival stores offer a decent range, too. Remember, if you have a PVR or internet TV device plugged into your TV you’ll get an even wider selection of apps, so all is not lost if you opt for one of the other brands.

There are all sorts of details to consider before you splash out on a new smart TV, such as price, screen size and whether you need to go 3D. In reality, the range of apps is unlikely to be your top priority.

Having said that, the shift in usage patterns shows we’re moving away from rigid TV schedules and want to watch what we want, when we want – so whether a TV has catch-up TV apps could be another thing to think about. A Twitter app to send live tweets during a TV show or football match may be an added bonus.