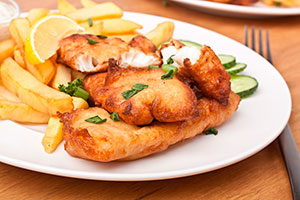 Seven out of 45 portions of fish bought from fish and chip shops across the UK were mislabelled, reveals a new Which? investigation.

Earlier this year, Which? research discovered that 24 out of 60 lamb takeaways we tested were adulterated with other meats, so we wanted to see if food fraud was also happening in fish and chip shops.

We found that food fraud isn’t limited to meat takeaways and horsemeat – fish in local chippies is being mislabelled too.

Which? members can read our full investigation into lamb takeaways. If you’re not already a member, you can gain access to this investigation and all of our online reviews with a subscription to Which?.

We bought 45 portions of fish labelled as haddock or cod from fish and chip shops in Birmingham, Manchester and Glasgow. We tested the fish DNA to find out what was really in it.

Whiting easily passes for cod or haddock and is a cheaper fish, often used in fish meal and pet food.

In April this year we launched our Stop Food Fraud campaign – we want you to feel confident that the food you are buying is what it says it is. It’s important that the Government, Food Standards Agency and local authorities take action to stop food fraud.

Last week the Elliot review into food fraud made a number of recommendations – including the creation of a Food Crime Unit. The Government has accepted the report and now needs to provide swift implementation, along with ensuring there is a coordinated network of food laboratories to analyse food.

More than 33,000 people have also signed up to support our campaign – sign our petition to help put pressure on the Government to do all it can to stop food fraud.

Tell us if you spot food fraud by emailing homeeditor@which.co.uk or on Twitter @WhichHome.