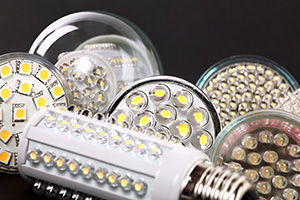 LEDs use 90% less energy than a traditional incandescent

Three scientists integral to the move towards domestic LED lighting have won the 2014 Nobel prize for physics.

Shuji Nakamura, Isamu Akasaki and Hiroshi Amano are co-inventors of efficient blue light emitting diodes which, when combined with phosphorous or red and green LEDs, can produce white light for homes and offices.

Since their breakthrough in the early nineties, the technology in LED lighting has come a long way – you can now buy LED light bulbs for your home for as little as £5.

However, you can also pay up to £40. To ensure you don’t spend any more money than you have to on light bulbs, at Which? we put LED light bulbs through rigorous tests to reveal which ones are the best – and you can’t tell just by looking at the price tag.

Our test results have revealed bulbs that fail far sooner than their packaging claims, and that produce light that differs by as much as 20% from what’s printed on the box. You can see the full results of our LED light bulb testing and find out which bulbs are Best Buys in our .

The benefits of LED light bulbs

For now, LEDs are the most expensive type of regular light bulbs you’ll see in the shops. But they do have advantages over the other types of energy-saving bulbs:

Things to watch out for with LED light bulbs

This relatively new lighting technology doesn’t come without its challenges. Here are a couple of things to think about before you decide to make the switch:

At Which? we test all types of energy-saving light bulbs, not just LEDs. So whether you want a cheap and cheerful light bulb for your garage or a high spec spotlight in your kitchen, you should be able to use our test results to get the right light bulb for your needs and budget.