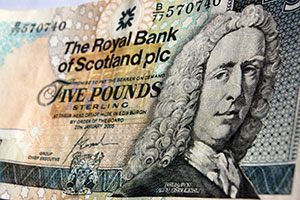 More than half of Which? members who have tried to spend Scottish or Northern Irish banknotes in England or Wales have experienced difficulties, Which? research reveals.

Of the 1,069 people we surveyed, 650 have attempted to spend Scottish or Northern Irish banknotes in England or Wales – 32% were given the impression by shop staff that they were unhappy to accept the notes; 26% were refused service altogether.

Those actually living in Scotland or Northern Ireland were significantly more likely to report difficulties when venturing south of the border or across the Irish Sea, with 37% encountering shop staff unhappiness and 35% saying they had been refused service.

The status of Scottish and Northern Irish banknotes, which are issued by the likes of Clydesdale and Ulster banks, is widely misunderstood.

In our survey, 73% of respondents said they believed Scottish and Northern Irish banknotes are legal tender in England and Wales, although technically this isn’t true.

Bank of England (BoE) guidelines state that only its own banknotes are ‘legal tender’ in England and Wales, but the term has a narrow technical meaning which need not govern the acceptability of banknotes in transactions.

‘The acceptability of Scottish or Northern Irish banknotes as a means of payment is essentially a matter for agreement between the parties involved,’ says the Bank of England.

Scottish and Northern Irish notes are legal currency, approved by the UK parliament, so we think retailers should accept them without complaint. If you do have problems, then any bank should change the notes for you.