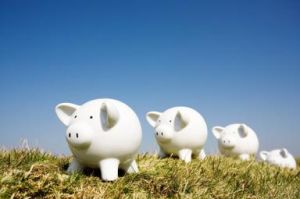 The ‘Big Four’ banks will now face an extensive investigation into their dominant position within the UK personal and business account market, it was announced today.

The Competition and Markets Authority (CMA) is concerned that the market share of the four largest providers – Barclays, HSBC, Lloyds Banking Group and Royal Bank of Scotland (RBS) Group – is still too high, with little chance of movement in the near future due to low switching rates.

The CMA made its announcement off the back of previous studies which found that essential parts of the retail banking sector ‘lack effective competition and do not meet the needs of personal consumers or SMEs (small and medium-sized enterprises).’

With some 65m personal current accounts active in the UK – generating revenues of £8bn – the investigation could have wide-ranging consequences, which may go as far as a break-up of the big banks or even an end to ‘free’ banking.

Go further: See our guides to find the best current account for you

With switching now easier than ever. With the Payments Council’s Current Account Switching Guarantee ensuring switches take place within seven days, switching levels have increased. Figures released by the Payments Council have shown that more than 1.2m current account-holders swapped to a new provider in the first year of the switching initiative, a 22% increase on the same period a year earlier.

However improved switching levels seem to have done little to affect the dominant market position of the ‘Big Four’.

Meanwhile, hoped-for improvements in customer service have yet to materialise – in fact complaints are on the rise. According to the Financial Conduct Authority (FCA), current accounts were the most complained about product in the first half of 2014 after payment protection insurance (PPI). In total, the FCA received 319,505 complaints about current accounts in the first six months of this year, more than 11% higher than the same period last year.

Go further: Our guide will show you how to switch current accounts

Look beyond the ‘Big Four’ for good deals

We have awarded ‘Recommended Provider’ status to First Direct (owned by HSBC) – along with smaller Norwich and Peterborough Building Society. Nationwide, along with smaller new players such as Danske Bank, M&S Bank and Metro Bank, round out the top six for customer satisfaction.

Meanwhile,depending on your needs, providers outside of the ‘Big Four’ will beat their bigger competitors for value and returns.

A recent Which? investigation on the subject of packaged accounts found that Nationwide’s Flexplus account offered add-ons worth more than three times the account’s yearly fee.

For those seeking the best credit interest rates may find TSB’s Classic Plus Account or Santander’s 123 Account to their liking – providing they can comply with the account’s requirements.

For authorised overdrafts, Ulster Bank and First Direct are the only two brands owned by the Big Four banks that appear in our best accounts tables.

Time for change in current accounts

Commenting on the announcement, Richard Lloyd, executive director at Which?, said: ‘Today’s decision means it’s now crunch time for the biggest banks that dominate a market blighted by a lack of trust and poor customer service.

‘We want the Competition and Markets Authority to expose the cost to consumers of a lack of competition in the current account market and to pave the way for reform. In the meantime, the banks should seize the opportunity to demonstrate that they can put their customers’ interests back at the heart of their business, whatever the outcome of this inquiry.’