The Windows phone app store might not be as well-stocked as its Android and iOS counterparts, but it still offers a decent level of choice.

When it comes to sat nav apps, you’ll find some good free options as well as paid-for alternatives – and even a Windows exclusive. We’ve tested a handful of these apps – here’s what’s available. 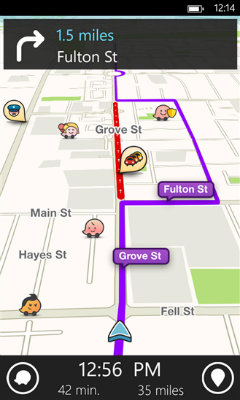 Waze is a community-driven (pun intended) sat nav app that relies on drivers contributing to its mapping to make it as accurate as possible. It’s certainly a unique approach – and it means that in areas with dense populations you’ll be alerted to potential road blocks, accidents or new routes in good time.

However, those who live in more rural areas with fewer Waze users may not find it quite as thorough. Don’t be put off if you don’t want to contribute to the community – you can use the app passively without being a roving reporter.

It’s worth noting that the Windows version of the app hasn’t received any updates in over a year, since Google purchased the company. It’s unclear if support has been totally withdrawn for the Windows app, but the iOS and Android versions are still receiving regular updates. 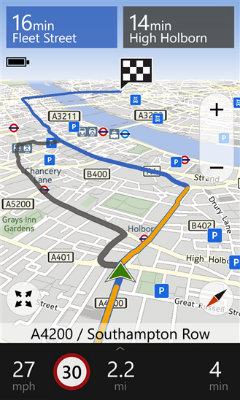 Here Drive+ (previously Nokia Drive) is only available on Windows phones, and certainly has a lot going for it. First off, traffic information is free. While there are many free sat nav apps on the market, most offer traffic information as an in-app purchase – but Here Drive+ gives it to you out of the gate.

The second bonus is that it can be used offline, meaning that it doesn’t require a constant data connection. This is a distinct advantage over Waze and Wisepilot if you have a limited data plan.

Here Drive+ isn’t without its limitations, though. It might seem churlish to complain about a free app, but there are lots of small issues with the software which could prove frustrating if you use it on a daily basis. Sometimes there’s a noticeable lag as the mapping catches up with your current location, and directions at roundabouts aren’t entirely clear. 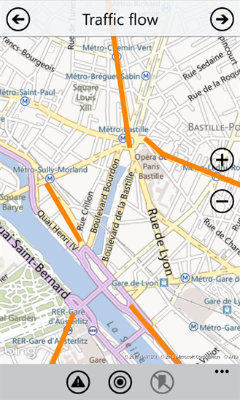 Another free app that’s available on other platforms, Wisepilot comes with some nice touches considering it’s free. It has voice recognition, allowing you to give give vocal instructions when driving, but it doesn’t accept postcodes so it’s not as fleshed out as standalone devices.

It offers traffic information and speed camera locations, but these aren’t free – you’ll need to purchase them through the app.

It’s a straightforward app and, while this may appeal to some, it could prove a little too basic for others. 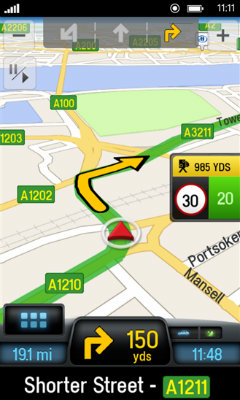 An alternative to the free apps available, Co-Pilot is a paid-for app for Windows phones. Its bright, bold mapping means it’s certainly visually appealing. As you’d expect from a premium app, it’s chock-full of features, rivaling the sort of functions you would find on a standalone sat nav.

In our testing we found that the app was unfazed by the small issues we threw at it. When we tried to go off course we were quickly corrected, and it handled complex junctions with ease.

It’s worth noting that there is a free version of the Co-Pilot app available on the Windows Phone store, but it’s fairly basic; it lacks turn-by-turn voice instructions, 3D maps, lane guidance and traffic, among other features.