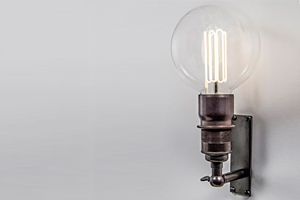 The new Eco-Filament (pictured) from Factorylux is the first compact fluorescent light bulb (CFL) that looks like an old-fashioned bulb.

Retro-look filament bulbs – where you can see the filament glowing inside – are hugely popular, but traditional versions are power-hungry.

The first filament-style LED bulb launched last year. These last longer and use less energy than standard filament bulbs. See how the Calex Filament LED fared in our tough tests by reading our light bulb reviews.

The Eco-Filament is available as a ‘pear’ or globe shape. Factorylux claims it will last for 25,000 hours – this would be an impressive lifespan for a CFL and would make it comparable to LED bulbs.

But, at 8w for 350 lumens (equivalent to around 25w), it’s not as efficient as the best CFLs or LEDs, and not bright enough to light a room.

The Eco-Filament bulb costs around £30 and you can only buy it online. We expect it to hit the high street later this year.

See which is the right light bulb for you and your home in our guide on how to buy the best light bulb.

Can a CFL take on LED light bulbs?

Classic energy saving CFL bulbs have been around for years. They typically come in a spiral or stick shape and have traditionally been an affordable alternative to energy-hungry halogens and pricey new LED bulbs.

Which? light bulbs expert Matt Knight said: ‘The Eco-Filament bulb marks an exciting development in CFL technology, as traditionally, CFL bulbs have been let down by their bulkiness. But, at £30, this new bulb is seriously pricey.

‘Retro-look filament LED bulbs – which are more energy-efficient than traditional versions – are already on the market, and most cost a lot less than the Eco-Filament bulb. But this new bulb is the first to truly replicate the decorative style and design of traditional filament bulbs.’

CFLs and LEDs are pricier than traditional light bulbs. But efficiency levels vary, and some will save you more money over time than others, so it makes sense to buy one that lasts.

Which? tests light bulbs by leaving them on for 2000 hours, equivalent to two years’ use. We turn them on and off 30,000 times to see if they can take heavy wear and test to see if they get less bright over time.