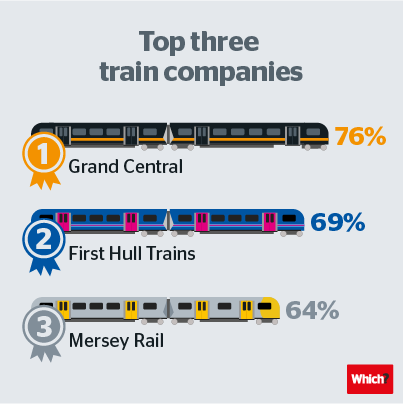 Two small train companies have won the top spots in the new Which? train satisfaction survey.

Grand Central and First Hull Trains, which both operate a handful of services between London and northern England, nab first and second place, with scores of 76% and 69%, respectively.

But seven train companies in England and Scotland fail to score more than 50%. Thameslink & Great Northern (known as First Capital Connect until September 2014) came last, scoring an uninspiring 43%. The service was rated poor for everything other than the frequency of the service. Abellio Greater Anglia, First Great Western, Northern Rail, ScotRail, Southeastern, Southern and South West Trains all score less than 50%.

The survey also showed that train companies are not doing enough to let passengers know about their compensation rights when they’re delayed.

Find out more: See full results of the Which? Train satisfaction survey.

Six of the seven companies passengers are least satisfied with are all poor when it comes to value for money.

The survey also reveals that train companies aren’t doing enough to let their passengers know about their rights to compensation when they’re delayed.

Find out more: See which train companies are best and worst for delays

The Which survey of more than 7,300 regular train passengers across all of the major train operating companies, compiled scores based on passengers’ overall satisfaction with a company and whether they would be likely to recommend it.