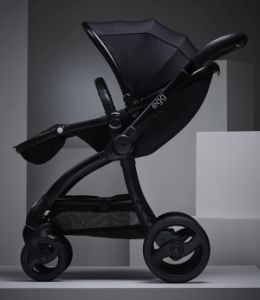 The Babystyle Egg has a seat curved like a shell

Babystyle had a huge success story with its affordable Oyster travel system, and is now hoping to take on the luxury end of the market with the Babystyle Egg pushchair. Which? gives you the lowdown on what you can expect from this pushchair.

The Babystyle Egg will be available, fittingly, this Easter. From the publicity campaign it’s obvious that Babystyle has high hopes for Egg, and sees it as competition for brands such as iCandy, Bugaboo and Silver Cross.

Story update: Read our review of the Babystyle Egg

See which other Babystyle pushchairs we’ve tested, and whether any of them are Best Buys.

We were invited to view the Egg at an exclusive press day and it’s obvious that a lot of thought has gone into the styling. which is very sleek and unusual. But what about the features?

The Egg will cost £700 and includes the chassis and seat, a seat apron, liner, raincover and insect net. Initially the Egg will come in three colours: white, grey and black.

You’ll need to buy the Egg carrycot (£180) as well if you want a pushchair suitable for a newborn.

The Babystyle Egg will be compatible with lots of car seats, including Maxi-Cosi, Be Safe, Cybex and Kiddy and Recaro.

There are plenty of additional accessories you can buy, such as a changing bag, parasol and footmuff.

The Babystyle Egg can be converted with an adaptor set to become a double pushchair for twins or children of different ages. Providing you bought the carrycot first time around, you’ll have all you need to use the pushchair for a newborn and your toddler. If you want to use it as a double beyond newborn stage, you can buy an additional seat unit (£170). From what we saw, the Egg will make a compact double.

How Which? reviews pushchairs

We’ve been testing pushchairs for years, so know the little things that make a pushchair a dream or nightmare to live with.

Our reviews are made up of combining lab experts’ assessments and real parents’ views, as well as full safety testing, so if you choose a Best Buy pushchair, it will not only be safe, but easy to use and a pleasure to push.