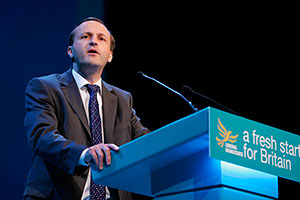 With just over three weeks to go until new pension freedoms begin on 6 April, Which? put the questions you’ve been asking about the changes to Steve Webb, the Pensions Minister.

The pension changes represent the biggest shake-up in the industry for a century. People will no longer be forced to buy an annuity with the pension pot they’ve saved up over their working life, but will be able to take the lot (subject to tax), leave it invested, buy an annuity – or choose a combination of options. Steve Webb was the driving force behind the changes.

He told us: ‘The new pension freedoms will empower people to make decisions which change their lives for the better. I believe people have the right to make their own decisions about how they spend money that they have earned and saved – and this should include their pension pot.’

But there are many questions about how the system will work in practice. So we put Which? members’ questions to the minister.

1. Will Pension Wise be enough for most people to enable them to make a decision about what to do with their pension?

People need to be supported when deciding what they should do with their money, and that’s why we are setting up Pension Wise [a free session of pension guidance for those about to retire] to provide impartial guidance.

When looking at your retirement, it is important to consider fully all the options and Pension Wise will help people prepare the information they need, such as their state pension statement and details of any workplace pensions they have and provide guidance online, over the phone or telephone or face-to-face.

A summary document after the guidance session will set out all the options and what actions they might choose to take – as well as further sources of reliable information. Some people may feel they need or want further consultation with an IFA before taking a decision.

For more: visit the Which? pensions and retirement hub – and our guides on Pension Wise and the state pension.

2. What are the current plans to tackle the historic mis-selling of annuities?

The recent Financial Conduct Authority (FCA) investigation found there was clear evidence that some firms’ sales practices were contributing to consumers not shopping around and switching, and so people were missing out on higher retirement incomes. In effect, companies have traded on the fact that consumers don’t shop around and taken advantage of that customer loyalty.

I know the FCA is working to identify whether there is a widespread problem or not and what this has meant for customers. Firms should be in no doubt about their responsibilities to their customers in relation to enhanced annuities.

For more: visit the Which? pensions and retirement hub – and our guides on annuities and your income options under the new pension rules.

3. Will anyone realistically be able to cash in their existing annuity? If so, when do you expect that to happen?

The new pension freedoms do not apply to scheme members who have already purchased an annuity. However, the government will need to, as it does with all taxation and pensions policy, keep this issue under review.

In light of the historic changes being made to pension saving, monitoring the impact of these changes should be a priority for the next government.

[The subject of potentially cashing in existing annuities is currently the subject of much speculation in the media].

For more: visit the Which? pensions and retirement hub – and our guides on annuities and your income options under the new pension rules.

4. Will income drawdown prove expensive for those with small/medium pots?

We are still in early days of the reforms. I fully expect the industry to develop new products as the changes bed in.

So my message would be for people to wait and see so they can fully assess all the options and to see what new financial products come on the market during 2015.

6 April starts a new era of pensions, but there is no need to take advantage on day one.

For more: visit the Which? pensions and retirement hub – and particularly our guides on income drawdown and the pension changes. Which? is campaigning for a cap on drawdown charges.

5. How can people get a clear idea of their state pension forecast, for those retiring after April 2016?

We recently extended the service to all those over age 55 so they can request a personalised state pension statement with an estimate of what they are likely to receive based on their current National Insurance record. Over the coming months, we intend to roll this service out to more and more people until eventually everyone of working age can get a statement.

For more: visit the Which? pensions and retirement hub – and our guides on the 2016 state pension changes and our state pension age calculator.