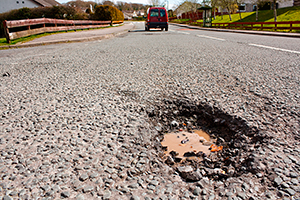 Nearly 70% of drivers have hit a pothole while driving in the last two years, new Which? research has revealed.

And a third of those who hit a pothole sustained damage to their vehicle as a result.

The Which? survey of 2,000 UK car drivers in February found that only two thirds of drivers who reported the damage to their vehicle made a claim for compensation.

But 55% of all resolved claims were awarded compensation, suggesting it’s worthwhile pursuing a claim.

If you want to claim compensation for damage to your vehicle, find out how to make a claim if you hit a pothole.

Drivers don’t know they can claim

The Which? survey found that 87% of drivers who sustained vehicle damage after hitting potholes in the last two years paid to repair the damage.

However, four in 10 drivers who sustained damage and didn’t claim compensation told us they didn’t know they could.

The same number of drivers told us they couldn’t face the hassle of making a claim.

Young drivers between the ages of 17-24 are more likely to hit a pothole, more likely to sustain damage to their vehicle and less likely to know they can make a claim for any damage.

All councils allow you to report potholes via their websites.

If you wish to report a pothole, make sure you collect as much evidence as possible, including photographs of the hole itself and any damage sustained to your vehicle as a result of hitting it.

Your chance of claiming compensation depends on whether a pothole has already been reported.

For instance, if the local authority already knew about the pothole but hasn’t repaired it, you may be able to claim compensation.

More potholes on the roads

The Which? survey also asked drivers about the prevalence of potholes on UK roads, with 82% saying they felt there are more potholes in their local area than there were five years ago.

In addition, 79% said they regularly have to swerve to avoid potholes. Six in ten drivers told us they don’t believe that councils do all they can to resolve potholes.