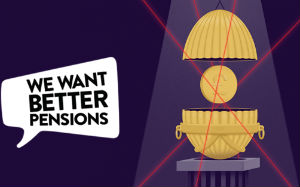 One month before the Government’s pension reforms begin offering people more flexibility and choice, Which? is launching a campaign calling for ‘Better pensions’ as we find people could lose out on thousands if they are sold inappropriate retirement products.

The Government’s radical pension reforms mean that a month from today people will have more options than ever before on how to use their pension pot.

This makes it likely that more people will use income drawdown products which allow them to take money out gradually each year. However, we found there still is a lack of product innovation and trust in this market, with big variations in charges between companies and even within the same provider.

The Which? report has been launched in the wake of the Financial Conduct Authority (FCA) warning people about the risks in cashing in their final salary pensions under the new freedoms.

In a snapshot investigation of income drawdown products currently on the market, we looked at how the reforms might impact a consumer who uses their existing provider’s products, and found the costs vary significantly.

Our research uncovered several high charging drawdown products, including one that charges 2.76%. We think this is too high for the mass market and want to see a cap introduced on products sold to customers by their existing provider.

We also found one provider charging 0.5% more than another for investing in the exact same fund, and one provider’s charges ranging from 0.44% to 1.24% for very similar funds, which can make a significant difference over the course of someone’s retirement.

The Which? ‘Better Pensions’ campaign is calling for action to make sure everyone can benefit from the freedom and choices available to them. We want a Government-backed drawdown scheme to be established to give everyone access to a good value, low cost product no matter who their pension provider.

Which? executive director, Richard Lloyd, said: ‘It’s right that the Government is giving people the freedom to decide how and when they access their hard-earned pension savings, but deciding how to use these savings in retirement is one of the most complex financial decisions many will have to make and one they cannot afford to get wrong.

‘That’s why we want the Government to take action to secure better pensions so people have just as much protection when they take money out of their pension as when they put money in.’

We know that people are worried about how much money they will need in retirement. The latest research from the Which? Consumer Insight Tracker reveals two-thirds (66%) of those aged 50-64 are worried about the value of their pension and just one in five (19%) people trust the providers of long-term financial products, such as pensions, to act in their best interests.

We also found only four in ten (41%) retired people say they are living comfortably on their pension.

We want the Government, pension providers and regulators to protect people when they take money out of their pension by:

Find out more: Better Pensions campaign – sign up to support our campaign